Barcelona failed to overcome a 4-0 deficit against Athletic Bilbao on monday night second leg of 2015 Spanish Super Cup, But it was alot more improved performance from Barcelona who obliviously missing Neymar’s goal threat.

FC Barcelona got an absolute hammering against Athletic Bilbao as they lost 4-0 in the 1st leg of the 2015 Spanish Super Cup. San Jose game Athletico 1-0 lead in the first half and three quick goals from Aritz Aduriz in the second half completed a most remarkable 4-0 win against Barcelona who has a mountain to climb in the second leg which will be played at Camp Nou on Tuesday, 18th August 2015.

Short Match Preview & Team News: Athletic Bilbao has some injury worries as Mikel Rico and Ander Iturraspe will miss the first leg while Iker Muniain is set to miss another one month with a longterm injury. Kike Sola and Aritz Aduriz are expected to start upfront.

Barcelona on the other hand are likely to hand rest for Anreas Iniesta who limped off against Sevilla and might be benched while Pedro came on to score the winning goal against Sevilla and he might start alongside Messi and Suarez. Neymar will miss another 10 days of action while Jordi Alba is also unavailable.

Possible Starting Lineups of Both Bilbao and Barcelona:

This is how I expect both teams to lineup. Since Pedro has revealed that he wants to leave the club it is highly likely that Jose Enrique might start with youngster Munir El-Haddadi instead of Pedro. 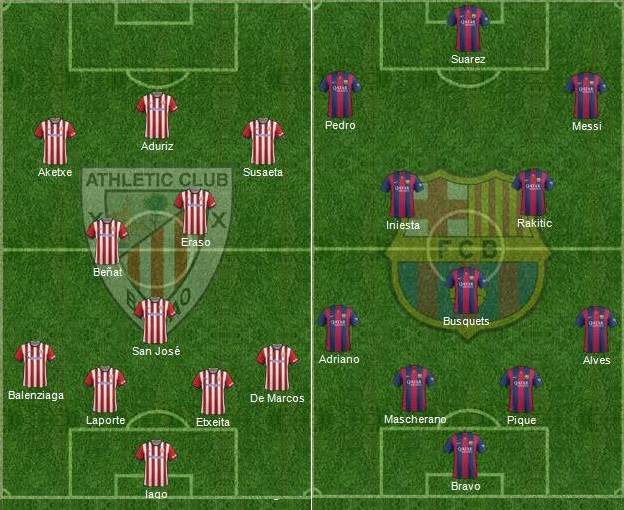 Match Highlights: As soon as the goals are scored during the match we will update the short goals videos right here within minutes as they go in. While extended full match highlights will be available after the final whistle. This page will also have the second leg highlights next week.

Predictions: Athletic Bilbao are decent team but plagued with injrues and Barcelona defeated Bilbao twice in the league and in the big Copa Del Rey final last season. I can not see the trend changing with Messi in such great form, Suarez has seem to settle in pretty well I can only see one result here and that is a Barcelona win but a narrow one to keep Bilbao in the hunt going into the second leg.