Barcelona took on Bayer Leverkusen in the Champions League matchday six game this wednesday night in Germany. Since Barcelona had already qualified as group winners Luis Enrique started with quite a young side with only Messi, Rakitic and Alba retained their place. Lionel Messi beat the offside trap to poke him as Barcelona go 1-0 up but 3 minutes later former Manchester United striker Javier Hernendaz scored to make it 1-1.

Luis Enrique’s side FC Barcelona took on german team Bayer Leverkusen in the group stages of 2015-16 UEFA Champions League and Kyriakos Papadopoulos 22nd minute goal in the first half stunned the home team and fans at Camp Nou. Leverkusen held themselves together throughout the first half but Barcelona scored twice in the space of two minutes to get their first win of the season.

Bayer Levekusen however won their opening fixture against Bate Borisov with a 4-1 scoreling and Javier Hernandez was on target in what was a very one sided affair. Levekusen will certainly fancy their chances against Barcelona side who will be without their star man Lionel Messi. We will have the match highlights available on this page after the final whistle until than here is the team news and possible starting lineups of both sides.

Barcelona vs Bayer Levekusen Preview: Barcelona looking like on their way to winning first group game against Roma when Luis Suarez goal gave them the lead in first half. But a wonder strike from Alessandro Florenzi canceled it out and game finishing 1-1 which was a decent result for both sides. Now since Barcelona will be without Lionel Messi for atleast 2 months they will be looking to make sure they don’t drop any points specially at home.

Andres Iniesta and Dani Alves are both expected to start for Barcelona while Claudio Bravo, Rafinha will definately miss the game and Vermaelen and Jordi Alba are both doubtful going into the game. Luis Enrique might give Munir El Haddadi the nod to start in starting line alongside Neymar and Suarez.

Leverkusen has some selection headech in defense with Omar Toprak, Tim Jedvaj and Aranguiz all ruled out for Barcelona clash. Karim Bellrabi and Keissling are expected to start upfront with Hernendez on the bench. 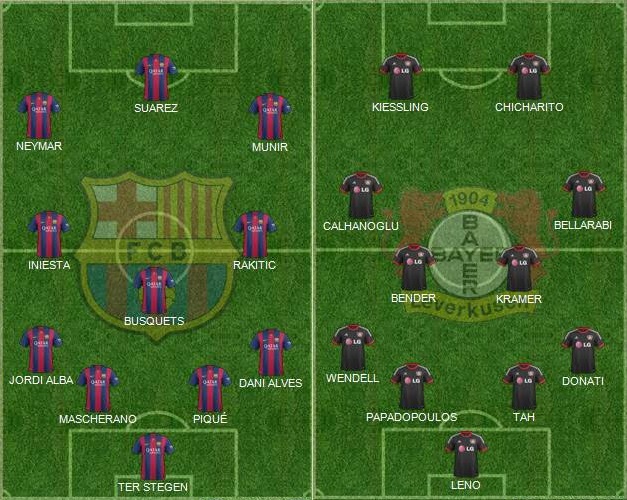 Match Predictions: Barcelona got their top spot in the spanish league after their win against La Palmas on the weekend but that came at a price with Messi ruled out for atleast 2 months. Levekusen has made a decent start to 2015-16 season winning 4 games and losing 3 in the league plus their opening day win in Champions League against Bate. Leverkusen however has struggling against Barcelona in the past, they lost all 6 meetings between the two and that 7-1 mauling at Camp Nou with Messi scoring 5 goals back in 2012.