FC Barcelona are set to visit Real Betis in the Spanish La Liga game on Sunday night, 21 January 2018 at the Estadio Benito Villamarín in Sevilla. Barcelona are still unbeaten in the league and lead the table by 9 points ahead of Atletico Madrid. Another win on Sunday will only put more pressure on the chasing pack going into the business end of the season. Real Betis are a decent side at home and will be interesting to see how they cope with Barcelona going into this weekend’s big game.

Real Betis are a decent team and usually end up somewhere mid table but when they take on Barcelona at Camp Nou more often than not they end up on getting hammered. Just like last season when Lionel Messi and Suarez helped Barca to a convincing win. However unlike the last few seasons this Barcelona side go into the new season not the team to beat and realistically they are not even the second best team in Spain anymore as I expect Atletico Madrid to put up a better fight against Real Madrid than this Barcelona side. 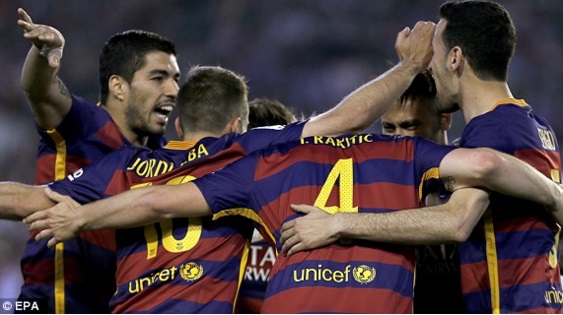 Team News & Lineups: Luis Enrique side has turned the tables in last two games winning both by handsom margin thanks to Europe’s most prolific hitman in Luis Suarez who has scored 8 goals in last 2 matches and he will be the key against on Saturday night. Barca don’t have any new injury concerns apart from second string players like Vermalen, Samper, Sandro missing through respective injuries. We can fully expect Barcelona to start with full strength side with Messi, Neymar and Suarez playing upfront while Rakitic, Iniesta to play alongside Busquest in midfield. Dani Alves might be brought back in the starting lineup having come on as a sub in previous game.

Match Predictions: Since Barca don’t have nay midweek assignments anymore team is already showing signs of form which made them go 39 games unbeaten. Barcelona’s back to back defeats are seem long time ago with Suarez scoring goals for fun and I can see another riot against Betis on Saturday night. I am going with a comfortable 3-0 win for Barcelona and it might give us clearer picture about who of the top three is not going to win the league. I expect Real Madrid to drop points against Sociedad while Atletico should win against Vallecano.