FC Barcelona are set to take on Celta Vigo in the Copa Del Rey 2018 round of 16 tie first leg game on Thursday night, 04 January 2018 which will be their first game after winter break in spain. Barcelona will have a busy period from now to end of the season and they will be looking to wrap up the tie in first leg if possible. Celta Vigo has given Barcelona hard time over the last few games they have faced each other and it will be another tough task for the Catalunya side. 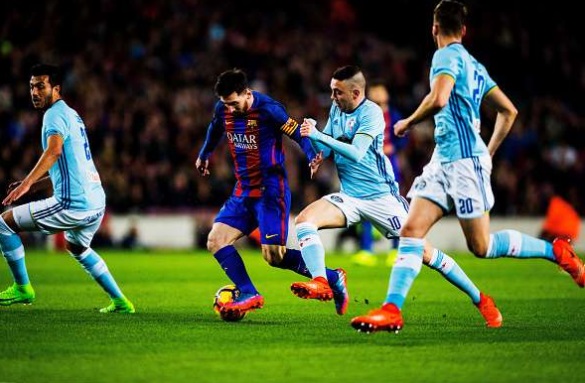 Last time these two meet in the Spanish La Liga was back in March 2017 when Lionel Messi lead Barca to a comfortable 5-0 win at home. They will be hoping for a similar result on Saturday to extend their lead at top of the table.

FC Barcelona might go into the game trailing by 4 and 2 points of Real Madrid and Atletico who are playing earlier in the day. This is a crucial weekend in Spanish football after which there is a international break and its vital for all three top teams to pickup wins to keep the pace at the top. Barcelona has shown signs of struggle away from home this season and without Lionel Messi they will have to be at top of their game. Celta Vigo secured impressive 4-3 win against Barcelona back in October 2016 at the Balaídos stadium. That was one of the best performances from a talented Celta Vigo side who certainly can up their game against the big sides in Spain.

Team News & Lineups: Barcelona rested number of first team players in the midweek copa del rey second leg of semifinal against Valencia but they will have most of the players back with Messi, Neymar and Suarez all fit and raring to go. Lionel Messi and Arda Turan were doubtful for this game but both have been included in the 18-man squad for the Celta Vigo fixture.

Celta Vigo on the other hand has massive selection problems with Andreu Fontàs and Nolito both ruled out due to injuries while yellow/red card suspensions of as many as four players leave Celta Vigo pretty much under-strength going into the match.

Celta Vigo has been pretty impressive specially away from home where they have won 5 games and lost only 4 and they currently sit 7th in the table with 35 points. Barcelona can go 3 points clear at the top of the table with a game in hand if they can get another home win this sunday night. This is how I expect both teams to lineup.

Match Predictions: Playing at home Barcelona are unbeaten this season winning 11 of the 12 games so far and with Celta Vigo struggling with injuries and suspensions I can not see any other result than Barcelona winning comfortably. I am going with a 4-0 win for the home side.