FC Barcelona reach the 2015 FIFA Club World Cup final which will take place on Sunday, 20th December 2015 against River Plate. Barcelona secured a comfortable 2-0 win against Chinse super league side Guangzhou with Luis Suarez scoring on the either side of the break and completed his hattrick to help Barcelona reach the finals of the 2015 competition.

Lionel Messi withdraw from the semifinal match against Guangzhou just before the kickoff but Barcelona secured easy win over Guangzhou with Luis Suarez scoring first of the game in 39th minute. Barcelona controlled the game throughout the match and Suarez was on target again to make it 2-0. Barcelona ensured their win with a penalty which completed Suarez hattrick and Barcelona raced to 3-0 lead.

The game will kickoff at around 19:30 local Yokohama time and it will be 10:30 am uk time on Thursday, 17th December 2015 and we will have live action of the game as well as match highlights once the game is over.

Barcelona vs Guangzhou Evergrande Preview: Back in 2009 Barcelona won all three available trophies completing the double treble which no team in history has done before. This year they only failed to win one trophy which was Spanish Super Cup against Athletic Bilbao back in August 2015. Barecelona are coming into this game on the back of a three back to back draws but their overall form this season has been even better than last year.

Guangzhou Evergrande won’t be pushovers, managed by world cup winning coach Luis Filipe Scolari currently on a 28 game unbeaten streak and they made it to the final semifinal by defeating Club América. Guangzhou are of course Chine super league and Asian Champions League winners. Guangzhou came from behind to win against Club America with ZHENG and PAULINHO scoring two late goals.

Guangzhou has some very skilled players in the team and top scorer Ricardo Goulart who top the chinese league scoring charts with 19 stikes last season alongside Robinho and Gao Lin forms a decent strike force. Former Spurs player Paulinho and Elkeson are pretty solid in midfiel. Barcelona will need to be at their best to make sure they don’t stumble against Guangzhou.

Team News & Lineups: Barcelona are likely to be without Neymar to give him more time to recover which means Lionel Messi and Suarez to start alongside Sergi Roberto or Munir El Haddadi. Rakitic, Iniesta and Busquest should keep their place in the midfield with Pique to partner Mescharano in defense. 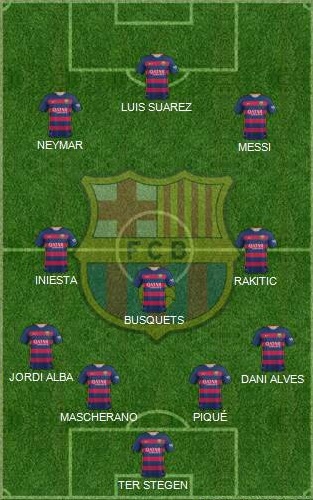 Predictions: Barcelona should cruise through to the final if they can take the game seriously enough. Guangzhou are good side on Asian level but Barcelona are a total different animal. I am going with a 3-1 comfortable win for Barcelona in this one. What you think of the game and how it is going to pan out ? can Guangzhou restrict Barcelona and snatch unlikely win ? Let me know your thoughts by commenting below.