FC Barcelona took on Leganes in what was a huge game for the club after that 4-0 defeat against PSG. They started stronger with Luis Suarez producing a stunning cross which was poked home by Messi in just 4th minute of the game. However it was much more difficult after that as Leganes made life difficult for Barcelona who looks like a team without much of direction and struggling to play their usual style. It was still 1-0 as both teams went into the break.

Barcelona go into this weekend’s game on the back of that devastating loss in the hands of Paris Saint Germain which erupted suggestions that Barcelona’s dominance is heading towards downward spiral. They need to put this terrible defeat behind and put together a strong finish from now to end of the season to keep themselves relavent. Madrid are 1 point clear at top of the table with 2 games in hand and the the kind of form they are in, hard to see Barcelona recovering the deficit. 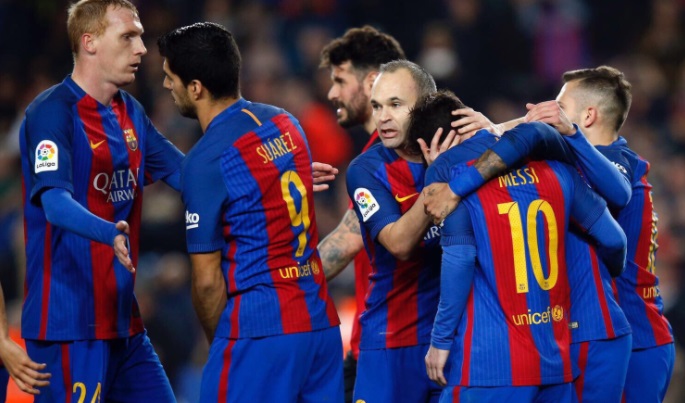 Last time these two meet was back in February 2017 when Barcelona ran out 2-1 winners thanks to yet another Lionel Messi brace. He will be the man to watch again as he has been well rested in the international break.

Barcelona 2-1 Leganes – February 2017
[ Spanish La Liga 2017 Match ]
04′ 1 – 0 Lionel Messi scored from close range to make it 1-0. It was Luis Suarez who produced a superb low cross right into the feet of Messi who poked home from close range.
71′ 1 – 1 Unai Lopez equalized midway through second half to put Barcelona under even more pressure.
90′ 2 – 1 Lionel Messi (Penalty)

Team News & Lineups: Luis Enrique has come under massive pressure after losing 4-0 against PSG. Odds are already slashed over him losing the job by end of the season unless Barcelona go on a perfect run and win the league. He is likely to revert back to trusted 4-3-3 system with Rakitic, Iniesta and Busquets in central midfield. This is how I expect both teams to lineup on Sunday.

Leganes who were promoted into La Liga after staller 2015-16 season in spanish division two has made a decent start winning 1, losing 1 and drawing 1 in the opening three games and although not much is expected of them against Barcelona they might get inspiration from another promoted side Alaves who got all three points at Camp Nou.