FC Barcelona took on Leicester City in the international champions cup friendly game on Wednesday night and it was a massive occassion for Leicester City who came a long-way since making their comeback in the premier league to become champions of England. Although they were found it in first half as Barcelona raced to 3-0 lead with Munir El Haddadi scoring twice while Suarez added the third. However Leicester City made a superb comeback in second half with two goals from new signing Ahmad Musa. 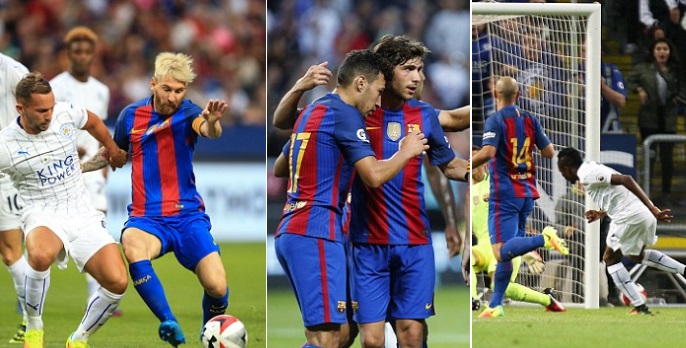 Barcelona will be bringing their full strength squad minus Neymar who will be part of Brazil’s Olympic team while Ivan Rakitic is given extended rest. Lionel Messi and Luis Suarez are both expected to start with Arda Turan, Iniesta, Aleix Vidal, Denis Suarez expected to play some roles during the game. Both Sergio Busquets and Javier Mascherano returns to squad alongside Jérémy Mathieu Munir El Haddadi and Sergi Roberto.

Leicester City on the other hand also have a full strength squad too choose from and we can expected Claudio Ranieri to field a similar starting lineup which will take the field against Manchester United over the weekend in community shield game. Jamie Vardy and Riyad Mahrez are both expected to start while Okazaki to partner Vardy upfront. Schmeichel will be in the goal as Morgan, Robert Huth, Fuchs and Simpson to start in back four. Danny Drinkwater, Marc Albrighton and Amartey should play in midfield.

Watch Leicester vs Barcelona Highlights: The game will kickoff at around 20:00 local sweden time at the Friends Arena in Stockholm. SkySports 1 will broadcast the game live in UK while ESPN continue their coverage of every International Champions Cup in United states. But if for some reason you missed the live action, you can always tune in here for full match highlights after the game.