FC Barcelona are set to take on Levante in the Spanish Primera Liga game on Sunday, 07 January 2018 at Camp Nou and it will be a crucial game for the Catalunya side who made their comeback into competitive football after winter break with a draw against Celta Vigo in Copa Del Rey. A win will allow Barcelona to extend their lead at top of the table or atleast maintain the 9 points advantage over nearest rival Atletico Madrid.

Barcelona visited Levante in the early kickoff on Sunday noon and it turned out to be a competitive game with Levante causing problems for Barcelona throughout the game. Barca had to rely on an own goal in first half to get in the lead. It was David Navarro who put the ball in his own net letting Barcelona off the hook. Although Barcelona enjoyed more of the ball but failed to take their chances. While Suarez secure three points in the last few moments of the game.

This game represent the best and the worst teams in the league with Barcelona running away with the title while Levante rock bottom with just 17 points so far in 22 games and they are 5 points away from 17th spot. Levante has not beaten Barcelona since 2004 and they have conceded four goals in each of the last 5 games between the two sides and looking at the form of both teams heading into Sunday’s clash I can see another goal frenzy with Messi, Suarez and Neymar running riot. 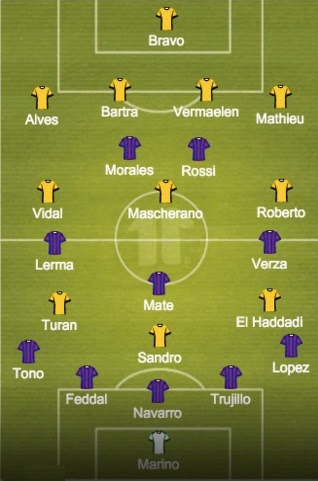 Team News & lineups: One problem for Barcelona is the fact that they are playing so many games since the start of the year that Luis Enrique might choose to rest a few players in next couple of games including Sundays clash against Levante and midweek Copa Del Rey dead-rubber second leg tie against Valencia.

We might see Enrique going with a second string side with one of the first choice front three starting. Sandro, El Haddadi and Turan might starting in the attacking roles while Ineista, Mascherano and Vidal to play in midfield roles.

Having said that we can’t rule out the possibility of Enrique having Messi, Suarez and Neymar on the bench just in case he need them later in the game.

Levante on the other hand will start with Rossi and Morales upfront while Verza and lerma to playing in three man midfield alongside defensive cover Mate. At the back Levante is likely to go with 5 man defense with Navarro playing as a sweeper.

Predictions: On current form I can’t see any other result than a Barcelona win but if Enrique decided to field entire second string side Levante might come out the stronger side at home.