FC Barcelona blitz past Rayo Vallecano in what was a very one-sided affair. Lionel Messi scored hattrick in what was a very action packed game where Vallecano saw two straight reds, Suarez missed penalty and Rakitic opened the scoring. Barcelona ran out 5-1 winners in what as a very easy win for Luis Enrique side. Watch match highlights of the game here

Barcelona secured yet another La Liga win and became the team with longest unbeaten streak in Spanish football history with 35 games without a losss when they defeated Rayo Vallecano on Thursday night. In the process they also regained their 8 points lead at top of the table. 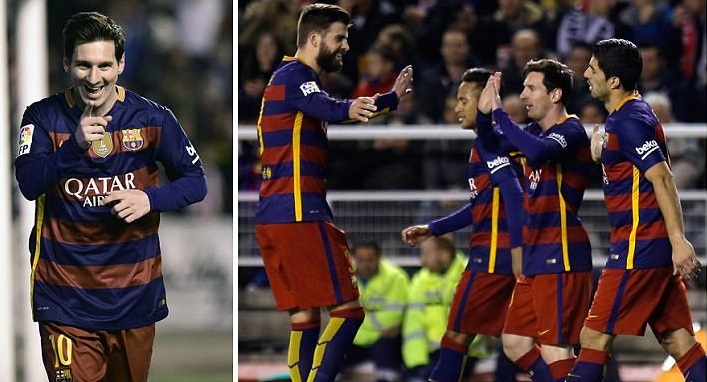 Ivan Rakitic scored the opening goal for Barcelona in 22 minute while Lionel Messi added another minute later to make it 2-0. Vallecano player Diego Llorente saw a straight red killing the game off pretty much before the break. After the break it was all Barcelona as they added another three and Vallecano got their second player sent off.

The game will kickoff at around 21:00 CET / 20:00 uk time and beINSports will have live coverage of the game in the US while SkySports will broadcast in the UK. If you missed the live action tune in here for match highlights and goals video after the match.

Preview & Team News: Barcelona need just another game without a defeat to beat all-time spanish record of 35 games unbeaten and they will be favorite playing away from home. If we look at the recent history between the two teams Barcelona has dominated this fixture having won each and every game since 2002 with scoring massive 45 goals and conceding just 4. Both sides meet earlier in the season where Neymar scored 4 goals to help Barcelona to a 5-1 win over Vallecano. The trend is most likely to continue but we might not see many goals.

Rayo Vallecano are currently sitting in 16th place just 2 places above the relegation zone only 1 point above the 18th place team. A defeat here will won’t hurt their chances of survival much as they are expected to lose this game anyway, but any other result than a Barcelona win will be a massive bonus. 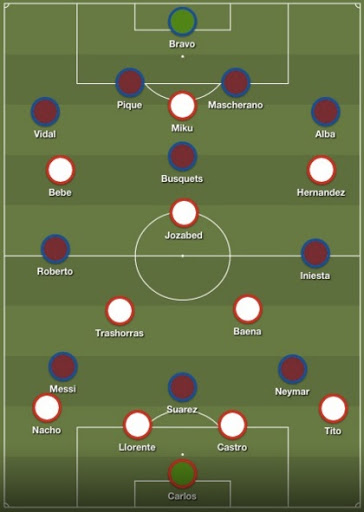 Possible Starting Lineups: Barcelona has a full squad to choose from with only Dani Alves missing due to suspension while Rafinha is a long term injury absentee. We might see Alex Vidal playing in right back position while Jordi Alba, Pique and Mascherano set to play in back four.

This is how I expect both teams to lineup on Thursday night. Neymar, Messi and Suarez to playing upfront with Busquets, Iniesta and Sergi Roberto playing in midfield roles. Claudio Bravo to start in goal.

Vallecano on the other hand will have Miku, Hernandez, Jozabed and Bebe in attacking roles.