FC Barcelona are set to take on Real Sociedad in the Spanish La Liga game on Sunday, 14th January 2018 at the Anoeta Stadium in San Sebastian. Barcelona can maintain their 16 points lead at top of the table and stretch even further from from Real Madrid who lost against Villarreal on Saturday. Lionel Messi is set to start alonside Suarez and Coutinho might find a place at bench for this game. The match kickoff at around 20:45 CET / 19:45 uk time.

These two teams have already meet three times earlier in the season where Soeciadad earned a respectable 1-1 draw in the league meeting back in November while Barcelona won both legs of their Copa Del Rey quarterfinal 1-0 and 5-2 respectively. Playing at home Barcelona has won 11 of the 15 home games and they should go as clear favourites on saturday night as well.

FC Barcelona 5-2 Real Sociedad – January 2017
[ Copa Del Rey 2017 Quarterfinal 2nd Leg ]
17′ 1 – 0 Denis Suarez scores for the second game running as he put Barcelona in lead at Camp Nou as they lead 2-0 on aggregate pretty much sealing their progress to next round.
55′ 2 – 0 Lionel Messi scored from the penalty spot to make it 2-0 and at that time it looked like curtains for Sociedad.
62′ 2 – 1 Juanmi brought Sociedad back into the tie with a nicely taken goal.
63′ 3 – 1 Luis Suarez was sent through on goal by a superb through ball by messi and he made no mistake in making it 3-1 and resting Barca’s 2 goal lead.
72′ 3 – 2 Willian Jose scored midway through second half to make things interesting again.
80′ 4 – 2 Arda Turan continue his superb start to the year as he found himself on the scoresheet.
82′ 5 – 2 Denis Suarez grabbed his second of the night and sealed a comfortable win. 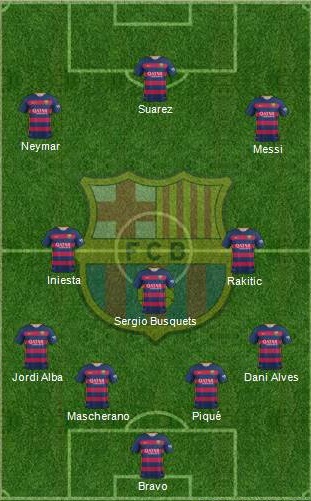 Real Sociedad don’t have much to play for after 32 games in the league, they are currently well placed above the relegation zone with 38 points but they will be looking to put a performance against defending champions and get something out of this match. As far as Barcelona are concerned if they can win all three points against Real Sociedad they will keep their 6 points lead and remaining 5 league opponents are all placed in the bottom half of the table.

Team News & Lineups: Luis Enrique don’t have any fresh injury concern but in spite of all the players available he might just stick with the full strength team for one more La Liga game just to make sure they don’t drop any points. claudio Bravo might start in goal ahead of Marc-Andre ter Stegen while Pique, Mascherano, Alba and Alves should continue in back four. Arda Turan might be handed a start in place of Rakitic while front trios of Suarez, Neymar and Messi will start for yet another league game.

Real Sociedad has somewhat become a boggy team for Barcelona, specially at home as catalan outfit has not beaten Sociedad away from home since 2007. Last 6 games at his stadium ended in 4 draws and 2 wins for Sociedad.

FC Barcelona were under pressure going into the saturdays clash against Real Sociedad having seen their lead at top of the table cut to just 3 points after Atletico and Madrid both won their respective games. Barcelona started with several key players on the bench and it proved costly as Real Sociedad took the lead through Mikel Oiarzabal in just 5th minute of the game. Barcelona were in for a fight against a team they have not beaten away since 2007.