FC Barcelona are set to take on Sporting Lisbon in the UEFA Champions League matchday 2 game on Wednesday night, 27th September 2017 at Estádio José Alvalade in Lisbon. The game kicks off at traditional european night time kickoff at 20:45 CET / 19:45 uk time and BT Sports will have live coverage in the UK while Fox is set to broadcast the game live in the US. However if you missed the live action, you can always tune in here for full match highlights after the game is over.

Lionel Messi is pretty much single handedly carrying Barcelona this season as both Suarez and Neymar have struggled to hit the heights of last two seasons. Luis Enrique will be hoping that his front trio can find some form from now to end of the season as we head to the business end of the season.

Sporting Gijon are currently sitting 18th in the table 2 points away from safety and their away form has been woeful where they have only won 1 away game of the first 13. Going into this midweek match not much is expected off from Gijon but they will try to frustrate Barcelona and hope they can catch them on of their frequent off days at home this season. 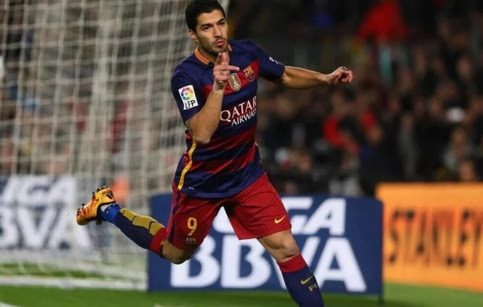 Luis Suarez will be hoping to continue his incredible goal scoring run against Sporting Gijon when Barcelona host them on Wednesday night, 01 March 2017

Sporting Gijon 0-5 FC Barcelona
[ Spanish La Liga 2016-17 Match ]
29′ 0 – 1 Luis Suarez scored in 29th minute to put Barcelona 1-0 in lead.
32′ 0 – 2 Rafinha doubled Barcelona’s lead minutes after Suarez goal to put Barcelona in commanding position as they go top of the table albeit momentarily.
81′ 0 – 3 Neymar openered the flurry of goals towards the end of the match with his first of the nightl.
85′ 0 – 4 Arda Turan madeit 4-0 minutes later with a nicely taken goal.
88′ 0 – 5 Neymar was on target again before the full time whistle when he scored to make it 5-0 and complete emphatic win for Barcelona.

Team News & Lineups: Barcelona will be traveling to face Gijon on Wednesday without the likes of Jordi Alba, Sandro and Sergi Roberto who were not fully recovered. Which means Pique, Mascharano, Dani Alvez and Mathieu should start in the back four while Busquest to anchor the midfield with Rakitic and Iniesta playing central midfield roles behind the incredible trip of Messi, Suarez and Neymar.

Sporting Gijon are just 2 points away from safety and they will be without Bernardo Espinosa and Roberto Canella who are longterm injuries and two fresh fitness concerns over striker Antonio Sanabria and Dani N’di will cause them to shuffle upfront.

Sporting Gijon has not beaten Barcelona since 1994 and with current Barcelona team hailed as the greatest ever we can safely assume Barcelona to win this game only question is by how many goals. Tune in here for the match highlights and goals video after the match.

After missing several chances, Barcelona finally scored their second of the night when Messi played Iniesta through on the left side and his low cross was bundled home by Luis Suarez at the far post and that opened up a flood gate as Barcelona ran riot in last 20 minutes and scored four more goals to make it 6-0 on the night.

FC Barcelona went into the Sporting Gijon game on Saturday night in third place as both Atletico and Real had won their games earlier in the day. Lionel Messi’s first half strike put barcelona on course but Gijon made life difficult for the defending champions at Camp Nou. Barcelona turn up the head in second half as they put 5 more past Gijon with Suarez grabbing 4 goals in second game in a running. Watch full match extended highlights of the match here.