David Beckham’s Great Britain and Ireland XI defeated Zidane’s Rest of the world XI in UNICEF Charity match on saturday. Sir Alex Ferguson and Carlo Ancolotti were in the dugouts while David Beckham’s son Brooklyn Beckham made a short camero towards the end of the game. 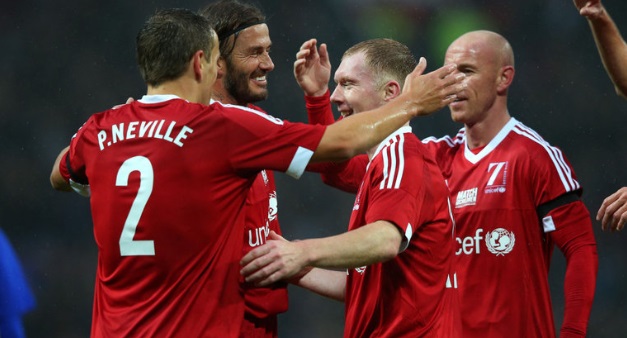 David Beckham will captain Great Britain & Ireland team managed by Sir Alex Ferguson against Zidan’s Rest of the World XI this Saturday, 14th November 2015. Carlo Ancelotti will manage Rest of the world XI which will include the likes of Van Der Saar, Cafu, Cannavaro, Nesta, Ballack, Ronaldinho, Zidane and many other greats of last decade.

The lineups has been announced for both teams where David Beckham will captain the likes of Ferdinand, Carragher, Cole, Scholes, Giggs, Owen and few other British players. Its been 10 years since David Beckham was appointed UNICEF Goodwill Ambassador and this game is part of the charity where all revenue will go to help under-previliged kids around the world.