Tunisia will take on Panama in their last group game of the world cup 2018. Both teams already knocked out but will be looking to get a win under their belt before they head home. Both team defense is as shaky as it can get with Panama already conceding 9 goals in the opening two matches while Tunisia let 7 in in two games so far. So we can expect a high scoring game this one and we will have live links closer to the kickoff.

Belgium will take on Tunisia in their second group game on Saturday, 23 June 2018 in what should be a cracking game considering Belgium can qualify for knockout stages with a win while Tunisia must win this game to stand a chance of qualification. The game will be played at the Otkrytie Arena and it will kickoff and it will be the first game of the day starting at around 13:00 uk time.

Belgium vs Tunisia Preview: Belgium went on to win rather comfortably in their opening group game against Panama with Lukaku scoring a brace while Dries Mertens opening the scoring with absolute peach of a strike. Tunisia on the other hand were just minutes away from snatching 1-1 draw against England but Harry Kane’s late goal undone all the good work by Tunisia.

Now Beligum can secure knockout berth with a win in this game and a game to spare while Tunisia must win this game to stand a chance of qualifying from this group. That setup a super encounter on Saturday and the way this World Cup has been going it will be foolish to write off any team.

This is how I expect both Belgiuma and Tunisia to lineup on Saturday afternoon.

Trio of Hazard, Lukaku and Mertens should continue in a three man attack Ben Youssef, Khazri and Saliti to start upfront from Tunisia. 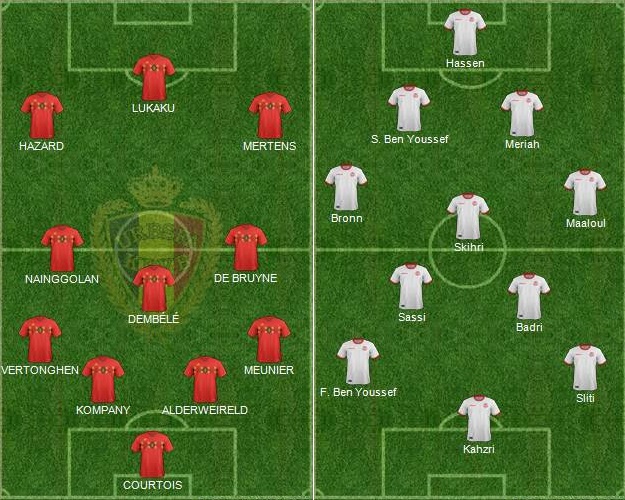 Match Predictions: Although Belgium won 3-0 in their opening game, Eden Hazard came out in the press conference after the game saying he expect more from Lukaku and accused him of hiding for most of the game. The media was quick to jump on his statement and it will be interesting to see whether this effect team’s moral in their next game or help them. Belgium are one of the favourites for this world cup and they have a very talented squad and I expect them to dispose of Tunisia with ease really. I am going with a comfortable 3-1 win for Belgium in this one.