Liverpool continued their superb run of form both in domestic football and now qualified for Europa League knockout stages with a 2-1 win over Bordeaux. Milner scored from penalty spot while Christian Benteke made it 2-1 with a belter of right footed shot.

Liverpool qualified for the Europa League knockout stages with impressive win against Bordeaux. Liverpool came for a goal down to score 2 just before the break. James Milner Penalty and Christian Benteke scored for Liverpool after Henri Saivet had put Bordeaux 1-0 up in 33rd minute.

Preview & Team News: Liverpool are coming into this game on the back of a massive 4-1 win over Manchester City over the weekend where Philipe Coutinho was the main man scoring a goal and creating two but he is unlikely to feature against Bordeaux on thursday night. However Roberto Firmino will keep his place in the starting lineup after good showing against City with Jordan Ibe likely to partner him in attack.

Christian Benteke missed out against City but he is also in contention to start against Bordeaux while Lallan providing support for front three in attacking midfield role. Lovren and Skrtel should start in central defense roles with Clyne and Moreno playing as full backs

Bordeaux must win this game to keep their chances of qualification to knockout round alive. 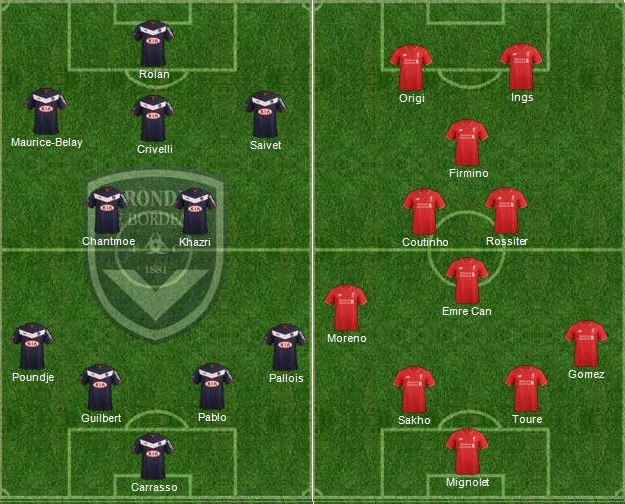 Match predictions: English teams have suffered in Europe so far but off late all Premier League sides showing some solid form in both Champions League and Europa League. Liverpool at home are not in the best of form but they should have enough to get a positive result against Bordeaux and qualify for knockout stages.