Manchester United take on AFC Bournemouth on Wednesday night, 13th December 2017 in Premier League game at Old Trafford. After losing 2-1 in the hands of Manchester City at home over the last weekend, this games hold significant importance for United and they must win this to not only keep their slender hopes of title race alive but also to restore some faith in players and fans alike. The game kicks off at around 20:00 uk time and SkySports has live coverage in the UK.

Preview & Team News: Manchester United had couple of very interesting weeks where they got two important away wins against Watford and Arsenal but they failed to stop City’s winning run losing at home 2-1 resulting in City taking 11 points lead at top of the table. There was alot of drama afterwards in the tunnel and dressing rooms and it has been all over UK sports pages.

However, common sense need to be restored at Old Trafford and United must go on a long winning streak to have even a slight hope of title race. Plus they must keep winning to ensure a top four finish in the league. However AFC Bournemouth are a difficult team to play against as United failed to beat them twice last year. 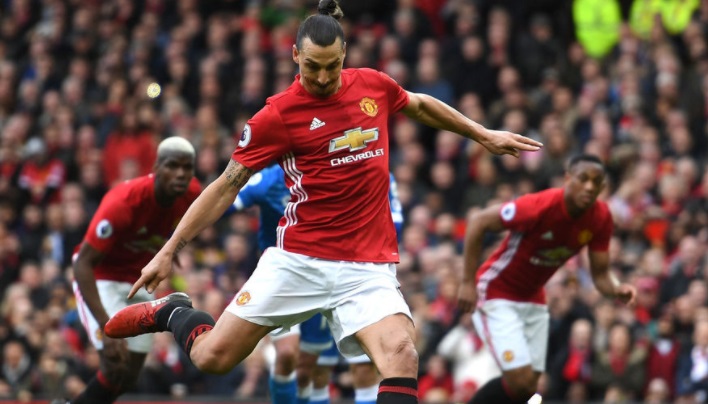 Manchester United were unable to beat Bournemouth last year losing away from home and drawing 1-1 at Old Trafford even though Bournemouth were reduced to 10 men at the end of first half.

AFC Bournemouth 1-3 Manchester United
[ Premier League, 2016-17 ]
40′ 0 – 1 Juan Mata scored after a terrible mix up by Bournemouth defense to put United 1-0 up just before the break.
59′ 0 – 2 Wayne Rooney scored with a close range header after Martial scuffed shot found its way to Rooney.
64′ 0 – 3 Zlatan Ibrahimovic produced moment of magic with a long range low drive past Bournemouth keeper to make it 3-1.
69′ 1 – 3 Adam Smith’s goal momentarily created anxiety in United ranks but they saw off the challenge with rather ease in the end.

Possible Staring Lineups: Manchester United will be without as many as 8 first team players for the Bournemouth trip. Bastian Schweinsteiger is suspended while Mateo Darmian and Chris Smalling also suffered injuries against Wolfsburg. United are also likely to be without Wayne Rooney for yet another game leaving only Martial as out and out striker. Which means United are likely to field couple of youngsters against Bournemouth.

Bournemouth on the other hand also have their injury worries with Distin, Federici and Lee Tomlin doubtful for United clash. This is how I expect both teams to lineup on saturday evening. 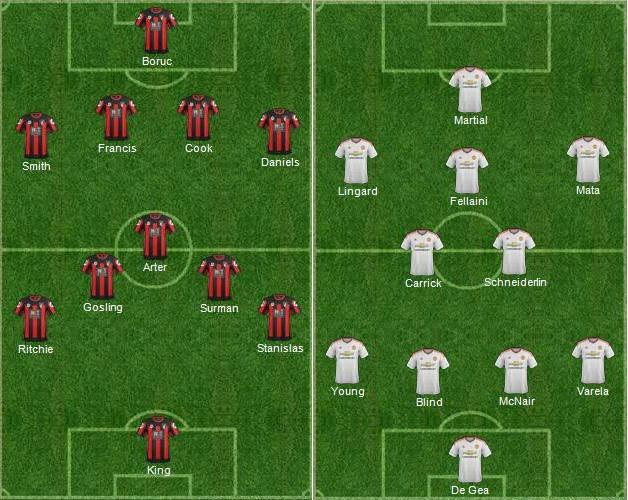 Predictions: Manchester United have been very strong in the last couple of months and although they are currently 6th in the table they look most likely team to finish in the top four. Jose Mourinho will stick with big guns on Saturday and I expect Ibrahimovic to continue his superb run of form to get on scoresheet. Wayne Rooney might not start but sure to play some part later in the game. I am going with a 2-0 win for United in this one.