Brazil took on Haiti in the must win game for five time world champions and they produced quite a show with Coutinho scoring a brace in first 30 minutes while a goal from Augusto made it 3-0 for Brazil as they went into the break cruising. Highly rated Gabriel came on as a sub in second half and he scored fourth of the night. While Lucas Lima added fifth while Augusto and Coutinho late goals completed a remarkable 71- win for Brazil who just need just a point to qualify for knockout stages when they take on Peru in a few days time. 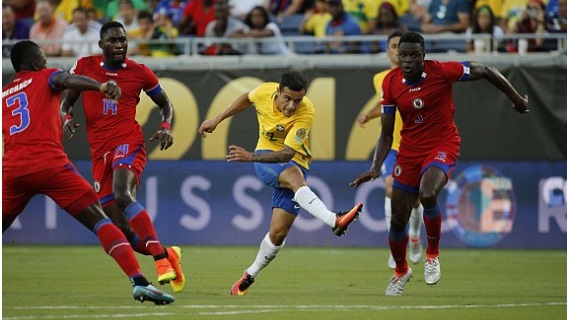 Brazil 4-0 Haiti Highlights
Copa America 2016 Centenario – Group B
14′ 1 – 0 Philippe Coutinho opened the scoring for Brazil in just 14th minute and ease the nervous for 5 time world champions.
29′ 2 – 0 Philippe Coutinho was on target against at the stroke of half hour mark with Brazil now cruising at this stage.
35′ 3 – 0 Renato Augusto made it three for Brazil minutes later.
59′ 4 – 0 Gabriel came on as second half sub and found himself on scoresheet in 59th minute.
67′ 5 – 0 Lucas Lima
70′ 5 – 1 James Marcelin
86′ 6 – 1 Renato Augusto
90′ 7 – 1 Philippe Coutinho completed his hattrick in style scoring Brazil’s seventh of the night.

Brazil dominated Ecuador in the opening fixture but failed to score resulting a 0-0 draw. Performance was pretty decent with pretty much a second string team with whole loads of top players missing from the Brazilian squad. However Brazil did got lucky in the end as Ecuador’s perfectly fine goal was disallowed. Now they are odds on favourite to win against Haiti who frustrated Peru in their opening fixture and could have got something out of the game in narrow 1-0 defeat.

Brazil played out a 0-0 draw against Ecuador and now must win against Haiti to keep their chances of knockout qualification alive.

Dunga is expected to make couple of chances in the starting lineup with Lucas Lima coming in for Elias and Lucas Moura might get the nod in starting lineup in place of Philipe Coutinho. Haiti on the other hand is expected to name the same team which took the field against Peru. This is how I expect both teams to lineup on Wednesday night.

Match Predictions: Brazil has too much talent even without the likes of Neymar, Douglas Costa, David Luiz, Oscar and Thiago Silva to drop points against a team like Haiti (no disrespect intended). Brazil still posses talented forwards including Benfica’s Jonas who had absolute beast of a season in Europe while wonder-kid Gabrial is another player to watch-out for while Willian, Lucas Moura also have world class quality going forward. I can only see one result in this one and thats Brazil putting on a show and producing a routine win.