Brazil sit comfortably at top of the qualifying table with 24 points and a massive win over Argentina this weekend and now they travel to face Peru on Tuesday night, 15th November 2016 and they game will be played at around 02:30 uk time. A win here for Brazil will pretty much ensure their qualification to world cup 2018 while Peru must win this game to get themselves back in the playoff places contention. We will have live action of this game right here plus match highlights. 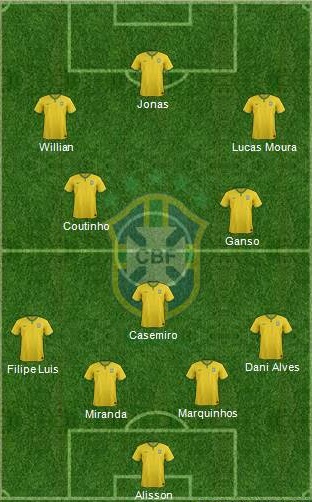 Last time these two meet was back in Copa America 2015 when Brazil came from behind to win the group game 2-1 thanks to Neymar and Douglas Costa goals. Both of them are missing from this Brazilian squad and tonights game will be a major test of Dunga young side.

We can expect Dunga to start with youngster Gabriel upfront after his lively performances in both of the first two games. Gabriel is pretty much into the mould of Neymar and big European clubs will be keeping an eye on this youngster who has so far rose to the occassion.

Predictions: Peru on the other hand have went into wilderness as far as their recent FIFA rankings are concerned, currently sitting in 61st place Peru once was a decent South American team and their performances in the Copa America since 1997 has been pretty good where they qualified for quarter finals 4 times and semifinals twice. This should be an easy win for Brazil.

Brazil are out of the 2016 Copa America after suffering a surprise defeat against Peru in the final group game. Brazil failed to take their chances and it came back to haunt them as Peru scored late in second half albeit in controversial circumstances when referee failed to spot a clear handball off Raul Ruidiaz who put the ball in the back of the net. Brazil failed to equalized and crashed out in group stages as Euador had earlier won their game against Haiti.

Peru 1-0 Brazil Highlights
[ Copa America 2016 ]
75′ 0 – 1 Raul Ruidiaz late goal in second half means Brazil are knocked out of the 2016 Copa Ameria. There was massive controversy as it was clearly a handball. Brazil will feel undone but the decision but as it stands Brazil are out of the 2016 copa america.

Brazil are coming into the final game of their 2016 copa america group stage with a resounding 7-1 win where Philipe Coutinho tore Haiti apart scoring a hattrick while Renato Augusto also grabbed a bace. Highly rated Gabriel came on in second half to get on the scoresheet. Having said that their fist game against Ecuador was a 0-0 draw and Peru will provide even stiffer challenge.