Bayern Munich move into busy festive period after the November international break where they will play as many as 8 games before the winter break. It starts with game against Fortuna on Saturday, 24th November followed by matches against Benfica in Champions League and Werder Bremen in Bundesliga. They also play Numburg, Ajax and Hannover in early december. Tune in here to get live streaming links of all Bayern Munich Matches.

FC Bayern Munich take on Borussia Dortmund in what should be a massive game in German league and it will go a long way to setup the title race this season. The match will kickoff at around 17:30 uk time / 18:30 local time and we will have live links closer to the kickoff.

Bayern Munich did not had the best of season’s last year where they only managed to win the German Bundesliga. They lost to Eintracht Frankfurt in the DFB Pokal Cup and also knocked out in the hands of Real Madrid in Champions League. They also have some troubles in the squad and they don’t look like a team with typical German efficiency going into the new season.

Upcoming Matches: Bayern Munich play as many as 3 competitive games in August starting with Community Shield game against Eintracht Frankfurt (12 August) followed by first round of DFB Pokal Cup (18th August) and their first Bundesliga game against Hoffenhiem (24 August). 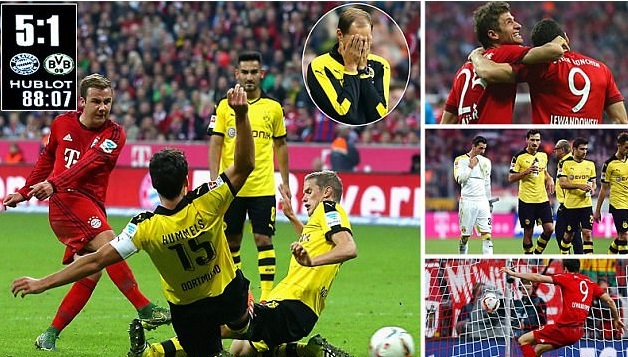 Dortmund’s improvement during the season was evident in their two games against Bayern this season as after losing 5-1 back in October 2015 they held Bayern to a 0-0 draw at home back in March. I am expecting another tight game in this one.

Dortmund vs Bayern Preview: Bayern Munich’s surprise defeat against FC Mainz has put the title race back into perspective as the biggest german match takes place this weekend on Saturday, 05 March. Second place Borussia Dortmund host Bayern Munich in a bid to reduce the points gap to just 2 poins if home side can get a win over mighty Bayern. Bayern are not the same team since Pep Guardiola announced that he will be joining Manchester City next season and things are a looking slightly more shaky for Bayern in last couple of months. Dortmund on the other hand has won 7 of their last 8 games in all competitions and will be smelling blood going into the most important week of their season.

Team News: Bayern Munich are sweating over the fitness of summer arrival Arturo Vidal who will have to pass late fitness test but Mario Gotze and Bernat are fit to start just incase Vidal fails to make it to the starting lineup. Mehdi Benatia, Frank Ribery and Holger Badstuber are ruled out but Arjan Robben might play some part in the game after recovering from muscle injury. Javi Martinez, Jerome Boateng, Philip Lahm and Alaba to play in back four.

Dortmund dont have any injury worries and Tuchel is likely to go with Kagawa, Gundogan and Reus in attacking roles while Aubameyang to play lone striker upfront. THis is how I expect both teams to lineup for the Sundays big clash. 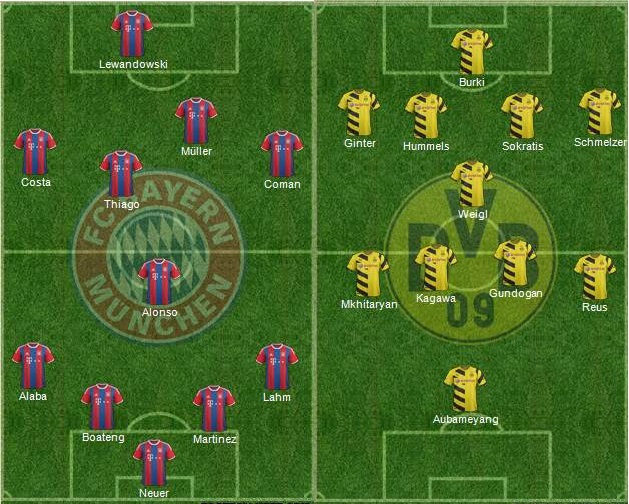 Predictions: Bayern Munich has been in absolute superb form since Jupp Heynckes replaced Carlo Ancolotti as Bayern Munich manager. They already sealed the Bundesliga title, are in the quarterfinals of 2018 Champions League and will be playing DFB Pokal Cup semifinal against Bayer Leverkusen.