Jose Mourinho’s 100th home game at charge as Chelsea manage did not go too well as it ended in his only second home defeat in chelsea career as Crystal Palace proved a very tough opponent. Chelsea suffered their second defeat of the season and now only have 4 points of first 4 premier league games. Watch Match Highlights right here.

Chelsea struggled to build any kind of rythem in the opening half and Crystal Palace were setup wonderfully at the back and they never let Chelsea forwards any space or time on the ball. Chelsea did have couple of decent opportunities with Pedro and Costa going close but Chelsea were always at the risk of a counter attack with very fragile defense. 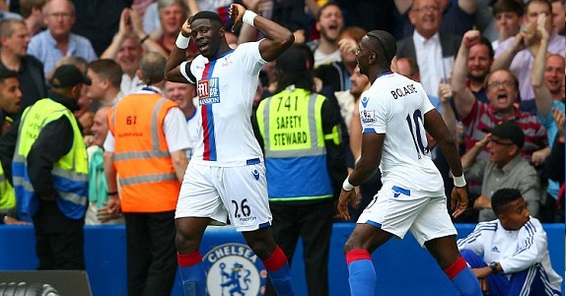 Palace goal in the second half came totally against the run of play when Gary Cahill’s header was cleared of the line by Bakary Sako and Palace countered from there and a Yannick Bolasie cross found none other than Sako who ran all the pitch on the other end to score first goal of the game.

Chelesa hit back 10 minutes later when substitute Rademal Falcao headed home equaliser and it looked like Chelsea will go on to win all three points after Falcao’s goal. But Crystal Palace go straight on attack after restart and they scored through Joel Ward to make it 2-1 for Palace against. Quite scenes at Bridge!