Arsenal are set to take on Chelsea in the Caraboa Cup 2018 semifinal first leg on Wednesday night, 10th January 2018 at the Stamford Bridge. This will be the first leg of a very exciting looking double header where both teams will be looking to book their place in the final of 2018 English League Cup. Second leg will be played at the Emirates Stadium which gives, Arsenal a slight advantage but looking at the past results between the two this tie is wide open and might actually go to penalties. We will have match highlights of both legs right here on this page.

Arsenal 1-1 Chelsea Highlights
[ English Premier League 2017-18 Match ]
63′ 1 – 0 Jack Wilshere scores with a superb left footed strike on the near post as Arsenal turned their dominance in the game into the first goal of the match.
67′ 1 – 1 Eden Hazard earned a very controvetial penalty and scored it past Cecz to make it 1-1. Arsene Wenger will surely have a few words to say about that after the game.

2017 FA Cup winners Arsenal take on 2016-17 Premier League champions and arch rivals Chelsea in the Community Shield game this Sunday, 06 August 2017 at the Wembley Stadium for the traditional curtain raiser of English football. The game will be played at around 03:00 pm uk time and SkySports will have live coverage in the UK. NBCSN will continue their top notch coverage of English football in the US.

Chelsea vs Arsenal – Premier League Match
Date: Sunday, 17 September 2017 – Time: 16:00 uk time
Channels: SkySports (UK), NBCSN (US), beIN Sports (Middle-east)
Match Highlights of Arsenal vs Chelsea will be updated on this page just after the game after Saturday’s final. We will have extended highlights just incase you miss the live action.

Arsenal vs Chelsea Preview: Chelsea has a wonderful record over Arsenal in the last 10 years and they will be confident of ending their season with superb two trophies by winning the final on Saturday. However Arsene Wenger can really take some heat of himself and his team with a victory in the FA Cup final which makes it a massive game for both teams.

Both teams meet twice already this season with Arsenal winning comfortably 3-0 at home while Chelsea secured an important win against Arsenal at the bridge on their way to 5th league title.

Its turning out to be a superb premier league season so far where only Chelsea have gotten results consistently. All other top 4 hopefuls blowing hot and cold. With season moving into the business end of the season any of the top 6 teams can put together a decent run of form and finish the season on high. While couple of consecutive defeats can pretty much hurt their champions league qualifying chances.

Team News & Possible Lineups: Arsenal are expected to start with Olivier Giroud upfront with Ozil, Ramsey and Sanches playing in attacking roles. Xhaka and Cazorla to start in central midfield roles. Chelsea might just use the similar system with Costa playing upfront while Oscar, Hazard and Willian to start in attacking roles ahead of Matic and Kante.

This is how I expect both teams to lineup on Sunday afternoon. We will have the confirmed team news before the game.

Match Predictions: Antonio Conte has been hailed as top manager after his successful league campaign and he can further enhance his reputation by winning the FA Cup. However Arsenal are in great form and ended the season in pretty solid 6 wins out of the last 7 matches and they can really sign off with a win and FA Cup final.

Chelsea recorded a very important win against Arsenal in the premier league match on Sunday and get themselves well away from relegation zone but they also hurt Arsenal’s chances of winning the league this season.

Diego Costa was at the heart of action forcing Mertasacker to a reckless challenge resulting in straight red while scoring minutes later with a super header to complete yet another premier league double.

Chelsea complete yet another league double over Chelsea as they defeated gunners in the the highly anticipated London derby this Sunday afternoon. First 25 minutes were full of action with Mertasacker getting straight red which was followed by a close range goal from Diego Costa. Arsenal played better in second half but it was always going to be a big task to get something out of the match with 10 men. 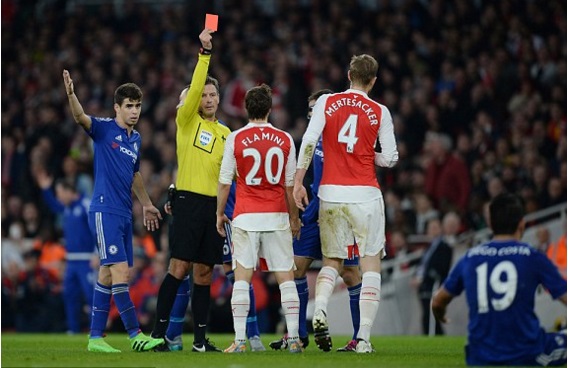 Diego Costa scored minutes later as he meet a inch perfect ball from Branslav Ivanovic to put Chelsea 1-0 up and continue Arsenal’s misery against Chelsea. 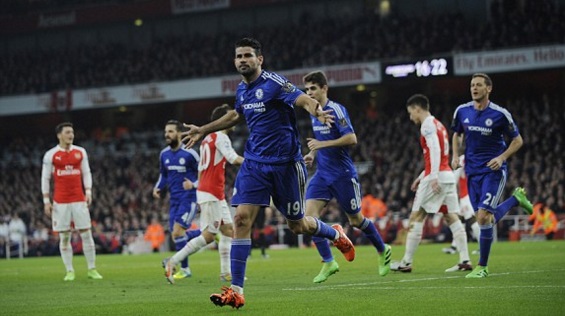 Arsenal were man down and a goal down within first 25 minutes leaving them a mountain to climb if they were to make a comeback in this game. With City and Leicester City getting results on saturday Arsenal might feel title is slipping away from their hands.