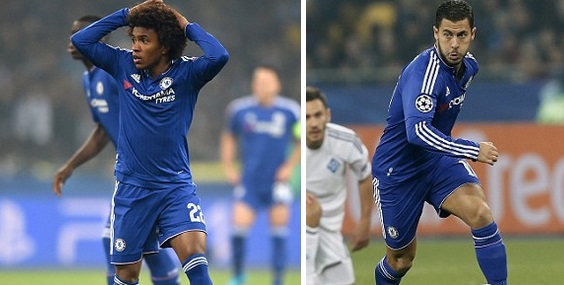 Chelsea took on Dinamo Kiev in the Champions League matchday four fixture at Stamford Bridge this wednesday night 04 november 2015 and it turned out quite a competitive game where Chelsea took the lead in first half through own goal but Kiev hit back with a goal from Dragovic late in second half and it looked like another disappointing night for Chelsea. But a late goal by probably the only inform player Willian secured all three points for Chelsea

Match Highlights
.
Chelsea might have themselves to blame if they fail to qualify from Group G as they were held away in Ukraine against Dynamo Kiev. Chelsea had chances to get that crucial goal but they failed to take chances. FC Porto sit top of the group with 7 points, while Kiev are just 1 point ahead of Chelsea with 5 points.

Chelsea are set to take on Dynamo Kyiv in the champions league group stage match away in Ukraine on tuesday night 20th October 2015. Chelsea are currently third in the group with 3 points behind FC Porto and Dynamo Kyiv who both have 4 points. Chelsea can go top of the table with a win and this is a game where they must take all three points in order to keep their knockout qualification hopes in their own hands. The match will be played at around 19:45 uk time and we will have match highlights right here.

Dynamo Kyiv vs Chelsea Preview: Chelsea season has been below par on every scale, they have already lost 4 games in premier league while in Europe they looked unconvincing in the opening two games. Mourinho has been under pressure since the start of the season with main players under performing week and week out. Cesar Azpilicueta and Baba Rehman are expected to start in full back role with Ivanovic missing out through injury. Loftus-Cheek might start his second game in week while Eden Hazard is expected to get back into starting lineup after missing out over the weekend in Premier League against Aston Villa.

Possible Lineups: Dynamo Kyiv dont have any major injuries apart from Serhiy Rybalka who is doubtful for Chelsea visit but according to reports he might be fit enough to start or atleast play some part as a sub. This is how I expect both teams to lineup ahead of Tuesday night game. 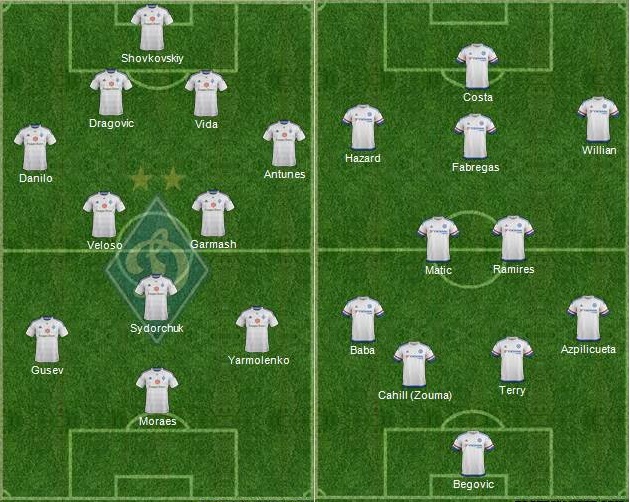 Match Predictions: Chelsea are shadow of their last season’s self but still they should have enough quality to see off Dinamo Kiev in this very crucial fixture where I expect Mourinho to start with strongest lineup today. I am going with a 2-1 away win for Chelsea which will go along way ensuring their knockout qualification. You can tune in here after the game to watch full match extended highlights which will be 15-20 minutes after the game.