Chelsea are set to take on Huddersfield Town in the premier league game on Tuesday night, 12 December 2017 at The John Smith’s Stadium in Huddersfield in what should be a very important league game for the blues. They can go level on points with Manchester United with a win who play against Bournemouth a day later at Old Trafford. Having lost against West Ham over the last weekend, Chelsea are now 14 points behind Manchester City and although title talk is over, they still need to keep picking up wins to make sure they stay in top four comfortably. The game kicks off on Tuesday night at around 19:45 uk time and SkySports has live coverage in the UK.

Huddersfield Town vs Chelsea Preview: Antonio Conte has already stated that title race is over with City pretty much blowing everyone away with 14 straight wins and Chelsea’s league aspirations are just to finish in top four and if possibly comfortably. Chelsea are drawn against FC Barcelona and they play important games around both Champions League ties in February which means Chelsea need to have enough lead over the top 4 rivals to risk dropping a few points when knockout stages begin.

Huddersfield Town on the other hand have been struggling of late after their superb start to the season. They now sit 12th in the table with 5 league wins so far. They must have watched West Ham’s win over Chelsea last weekend and will be looking to get inspiration from that Chelsea defeat to get something out of this game.

Alvaro Morata is set to start upfront with Hazard and Pedro playing in attacking roles while Fabregas, Kante to play in central midfield while Marcus Alonso and Zappacosta to start as wing backs ahead of three man defense with Cahill, Azpilicueta and Rudiger. 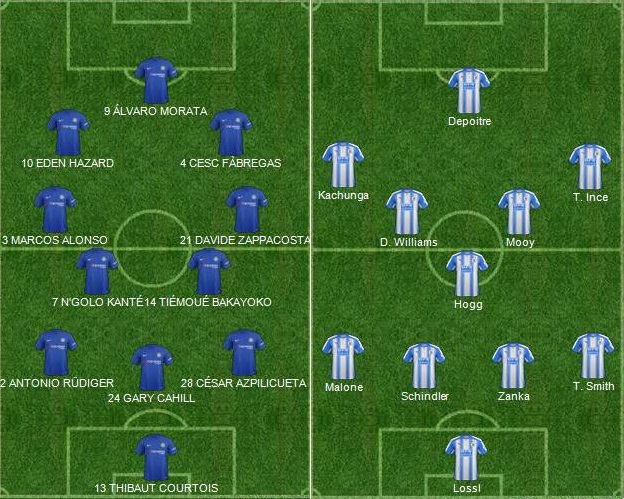 Match Predictions: Hard to see any other result than a Chelsea win here. Well, atleast on paper but this Chelsea side are not as resiliant as the previous few Chelsea sides. They can be bullied and frustrated and thats exactly what Huddersfield will be hoping. I can see Chelsea winning this one but will be difficult night for them.