Chelsea visit Liverpool in a very intriguing Premier League on Saturday evening, 25 November 2017 at Anfield. Only 3 points and two league positions separate the two but if Chelsea wins Liverpool might find themselves 4 points behind the top 4 teams by the end of the weekend which makes it a must win for Liverpool while Chelsea will be more than happy with a draw to get this difficult away game out of their system.

Liverpool 1-1 Chelsea Highlights
[ Premier League 2017-18 Match ]
65′ 1 – 0 Mohamed Salah scores from close range after Oxlaid Chamberlain pounced on defensive mistake from Bakayouko and squared it for inform Salah who refused to celebrate after scoring.
85′ 1 – 1 Willian made it 1-1 on the night late in second half.

Jurgen Klopp has come under severe criticism for not taking FA Cup seriously and fielding so many youngsters in what turned out to be a 2-1 defeat in the hands of Wolves eliminating Liverpool from all cup competitions this season. However there is a silver-lining for the Reds as they play only 16 games from now to end of the season which put them in a superb oppertunity to mount a serious challenge for top3 places. Chelsea are in a similar position as they play 16 league games and a few in FA Cup depending on results.

Liverpool and Chelsea are set to duel for the first time this season albeit in a friendly game as part of the international champions cup 2016 at Rose Bowl Stadium in Pasadena this Wednesday night, 27th July 2016. Both teams have already played couple of friendly games but this one is the first of three major friendlies scheduled on US tour.

Last time these two teams meet was back in January 2017 when Wijnaldum canceled out David Luiz opener to share the spoils. Another such result on Saturday won’t suit either side as they are looking to challenge for top of the league.

Liverpool 1-1 Chelsea – January 2017
[ English Premier League 2017 Match ]
25′ 0 – 1 David Luiz scores with a stunning freekick which caught Liverpool keeper and defense off guard. In the opening exchanges Liverpool looked the sharper but Chelsea as a well oiled mechine stuck to their guns and played on counter throughout first 45 minutes.
58′ 1 – 1 Georginio Wijnaldum scores after the halftime break to make it 1-1 on the night and open the game up for rest of 30 minutes.

Chelsea vs Liverpool Preview: Not much at stake but both teams will be going at it for three points but we can safely assume both camps will use some of the fring players in the premier league clash at Anfield this wednesday night, 11 May. Liverpool will be slightly favourite with the kind of form they are in while Chelsea are hoping to end their terrible season on a positive note.

Liverpool are highly likely to keep the starting lineup which took the field against Leicester City while Chelsea are forced to make changes including David Luis coming in for captain John Terry at the back. 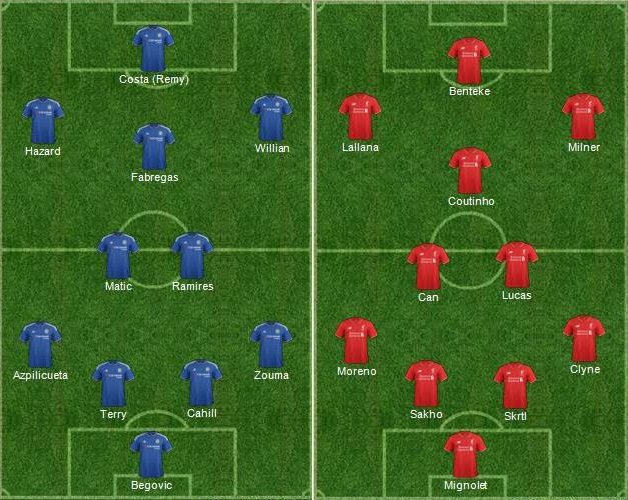 Match Predictions: This will be an interesting game for both teams who need a win to keep the pace at top of the table. Liverpool are fresher of the two having played in Champions League on Tuesday while Chelsea had to visit Azerbaijan on Wednesday and returned a day later on thursday provoking Antonio Conte to blame the fixture list. Liverpool usually do well at home against the traditional big teams and I expect them to get the better of Chelsea again on Saturday.