Chelsea are set to take on Southampton in the Premier League game on Saturday, 16th December 2017 at Stamford Bridge. Chelsea can go level on points with second placed Manchester United side who play later on Sunday against West Brom. A win for Antonio Conte’s men holds significant importance if they were to have even a slight chance of retaining Premier League title. Match will be a tradtional 3pm kickoff which means no TV coverage in the UK but we will have full match highlights after the game is over.

Chelsea are currently sitting third in the table, thats 14th points behind leaders Manchester City and 3 points behind Manchester United. A win is very important for Chelsea who are having a very underwhelming season so far. But if they can pickup the pace from now to end of the season, they are the most likely team to put pressure on Manchester City.

Southampton on the other hand got a massive 1-1 draw against Arsenal over the last weekend but they were undone but a very clinical Leicester City side in midweek when they stumbled to a 4-1 defeat. Southampton will be looking to frustrate Chelsea on Saturday and hope to catch them on the break. 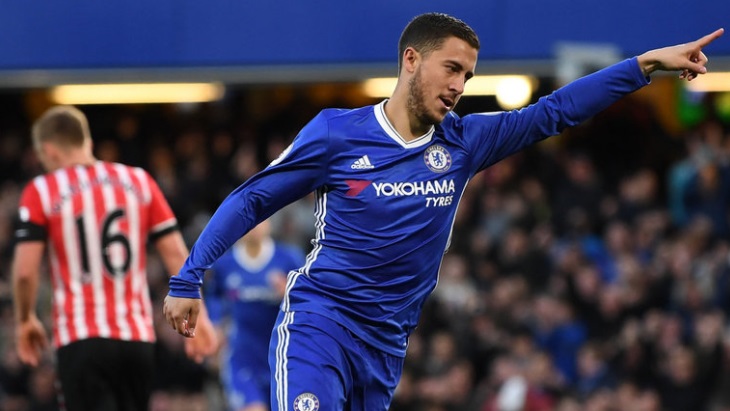 Last time these two meet was back in April 2017 when a comfortable 4-2 win for Chelsea put them en route to their premier league crown. Hazard, Costa were on target for the Blues.

Southampton 0-2 Chelsea – 30 October 2016
[ English Premier League 2016-17 Match ]
06′ 0 – 1 Eden Hazard scored inside first 6 minutes of the game where he found himself clear on the right flank and cut inside before unleashing a low shot past Fraser Forster legs to put Chelsea in leaad.
55′ 0 – 2 Diego Costa scores just after the halftime to put Chelsea in commanding 2-0 lead.

When the two sides meet earlier in the season back in October 2015, Southampton ran out 3-1 winners at Stamford Bridge. Alot has changed since than, Mourinho fired in december and Guus Hiddink has kind of steady the ship. Chelsea are yet to lose under Hiddink in the league and a win over Southampton will surely put them in great position to mount a serious challenge for the European places.

Jay Rodriguez and Gardos are only injury worries for Southampton while Chelsea will be without Zouma, Falcao. John Terry might miss the game just for precautionary measures with Ivanovic playing in central defense. This is how I expect both teams to lineup on Saturday.
Possible Starting Lineups: 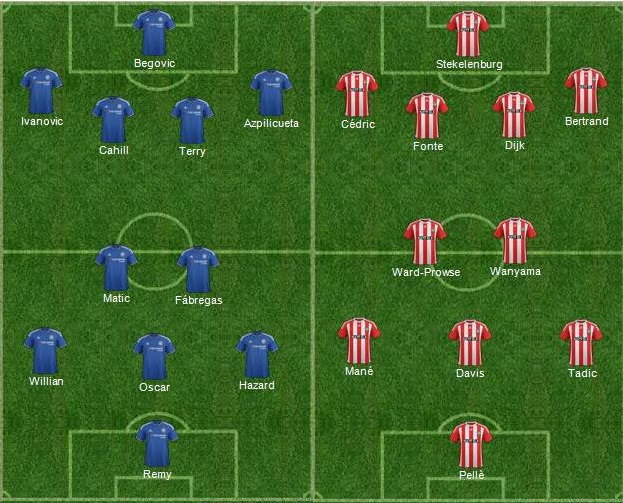 Predictions: Southampton will fancy their chances against Chelsea who coming into this game with a 5-1 win over second string Manchester City side in FA Cup. Southampton are enjoyed superb run of form at home and should get something out of this game. I can’t see Saints losing this one as I am going with a 1-1 draw in this game.

Chelsea started without John Terry in central defense and it turned out a difficult match against Southampton at St Mary on Saturday. Southampton set up with a deep defense allowing Chelsea to have more of the ball and try to catch them on counters. Shane Long’s goal just before the break put Southampton 1-0 up but Chelsea came roaring back towards the end of the game with two goals in last 15 minutes turn the result on its head as Chelsea win 2-1 and move into top half of the season.

Shane Long caused constant trouble for Chelsea back four throughout the opening 45 minutes but after missing couple of chances he finally scored with a superb finish when a knock on from Baba Rehman allowed him to run one on one with the keeper.

Southampton looked better side of the two and deservedly took the lead just before the break when Baba Rehman’s weak headed clearance fell nicely for Shane Long who took a long touch and poked home with neat dip over the keeper.