Defending champions Chelsea are set to host Stoke City in the premier league game on Saturday, 30th December 2017 at Stamford Bridge. Chelsea will be looking to overtake Manchester United into second place for atleast a few hours as United play later in the evening against Sothampton. The game will be a 3 p.m kickoff which means no TV coverage in the UK however NBCSN will broadcast the match live in the UK. We will have extended match highlights of the game here after the match is over.

After the opening day defeat in the hands of Burnley, Chelsea have kind of steady the ship winning 3 and drawing the other game against Arsenal. Which puts them third on the table 3 points behind both Manchester clubs. Antonio Conte’s will be hoping to have a similar league performances as last year when they started slow but went on a long winning streak which ultimately sealed the title. However Stoke City are a tough team to play against who have beaten Arsenal and drawn against United already this season. Mark Hughes rested some key players in the EFL Cup game in midweek which means they will put a strong side against Stoke on Saturday.

Last time these two meet was back in September 2017 when Chelsea secured a comfortable 4-0 win against Stoke City thanks to goals from Morata and Pedro. Chelsea will be hoping the same on Saturday night. 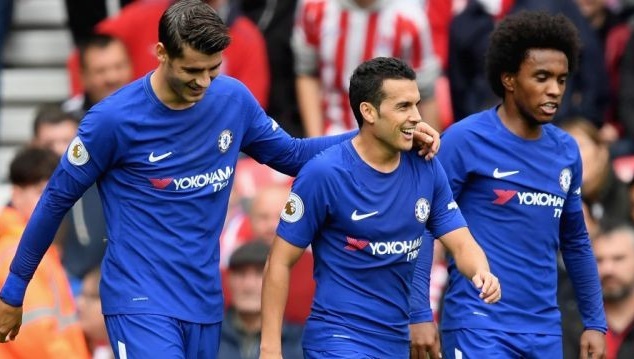 Spanish duo, Morata and Pedro were on target in what was a very routine win in the premier league when these two meet last time back in September 2017.

Stoke City 0-4 Chelsea – September 2017
[ English Premier League 2017-18 Match ]
02′ 0 – 1 Alvaro Morata scores early in first half to put Chelsea in lead and continue his superb start to Chelsea career.
30′ 0 – 2 Pedro Rodriguez made it 2-0 for Chelsea at the half hour mark as Chelsea totally dominated the game.

Team News & Lineups: Chelsea has a massive game in midweek against PSG which might prompt Hiddink to rest Diego Costa and start with Alexandre Pato upfront. who has been named in the squad facing Stoke City alongside Remy and Pedro. Willian, Oscar and Hazard should keep their places in starting lineup.

Stoke city on the other hand will start with Arnautovic and Bojan playing supporting roles to Meme Diof who will start upfront. This is how I expect both teams to lineup on Saturday. 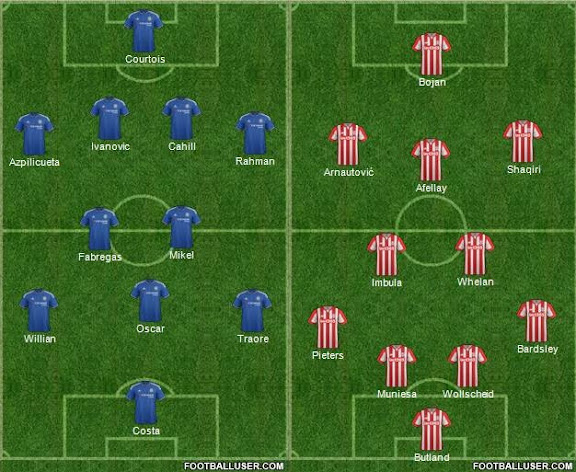 Match Predictions: Its a tough one to predict, Stoke City will be looking to win their 4 straight game while Chelsea just can’t seem to lose in premier league having gone unbeaten since Hiddink took over. Playing at home Chelsea will be slightly favourite and i am going with them to continue their impressive run of form. So its 2-1 for Chelsea as far as I am concerned.