Chelsea are set to take on Watford in the Premier League game on Saturday lunch time kickoff, 21st October 2017 at Stamford Bridge in London. Having lost two back to back Premier League games, Chelsea’s title challenge is already in disarray and anything but a win for Chelsea will put them under real pressure specially if both Manchester clubs win their game. The match will be early kickoff on Saturday starting at around 12:30 uk time and SKysports has the live coverage in the UK.

Chelsea 3-2 Watford Highlights
[ English Premier League 2017-18 Match ]
12′ 1 – 0 Pedro Rodriguez scored inside 12 minutes of the game to put defending Champions in the lead at Stamford Bridge.
45′ 1 – 1 Abdoulaye Doucoure scored just before the break to make it 1-1, a well deserved goal for Marco Silva’s team.
49′ 1 – 2 Roberto Pereyra scored just after the halftime to make it 2-1 for Watford as Conte and his Chelsea side stare into another defeat.
71′ 2 – 2 Michy Batshuayi
87′ 3 – 2 Cesar Azpilicueta

Chelsea manager Antonio Conte looked annoyed after another draw in the Champions League against AS Roma, where they gave away a 2-0 lead to draw 3-3 on the night. Plus two back to back defeats in the League has already put Chelsea way off the pace at top of the table. Conte failed to control his emotions when in the post-match conference he took the bait from media and attacked Mourinho. Things are not going well at the Bridge and this is one tough game against high flying Marco Silva’s Watford who can beat any top side in the league on their day.

Watford sit fourth in the table after 8 games and any doubts about Marco Silva’s appointment are thing of the past. Some of the major clubs around the world are already looking at him including Arsenal as their future manager. He setup his teams just like Mourinho, based on strong defensive foundation and play on counter attacks. Chelsea will need to be at top of their game to get something out of this match.

Cesar Azpilicueta was on target for Chelsea as they saw off the challenge from Hornets in a exciting 4-3 win back in May 2017. Chelsea will be looking to break their 2 game losing streak or their title challenge will be in real jeopardy.

Chelsea 4-3 Watford – May 2017
[ Premier League 2017 Match ]
22′ 1 – 0 John Terry scores on what might be one of his last games at stamford Bridge.
24′ 1 – 1 Etienne Capoue scored after Terry’s was involved in a mix up at the back.
36′ 2 – 1 Cesar Azpilicueta scores his first goal of the campaign and third overall in his Chelsea career.
49′ 3 – 1 Michy Batshuayi continue his scoring run scoring again against Watford.
51′ 3 – 2 Daryl Janmaat however kept Watford in the game scoring just after halftime.

Chelsea vs Watford Preview & Team News: Walter Mazzarri will be able to pick his strongest lineup as Watford has no fresh injury worries. Which means Ighalo and Deeney are set to start upfront while Abdi and Jurado will have attacking midfield roles.

Chelsea on the other hand are likely to start with Eden Hazard in midfield while Diego Costa, Willian and Oscar are set to start in attacking roles. Matic and Fabregas will play in deep midfield roles. This is how I expect both teams to lineup on Saturday. 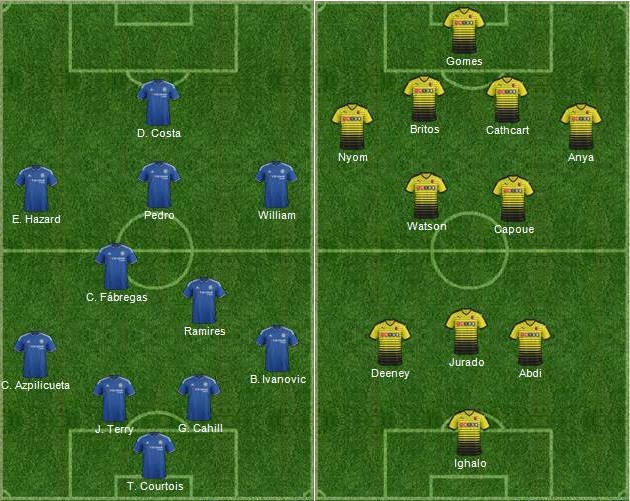 Predictions: I expect Chelsea to build on their opening day win. Diego Costa is their likely source of goal and he will be confident after scoring important winning goal against West Ham. Watford has Deeney and Ighalo who can cause trouble for any defense. I am going with a 2-1 win for Chelsea in this one.