Chile are set to take on Ecuador in one of the biggest game this international break where a win for either side will either increase their chance of qualifying for World Cup 2018 and a defeat will certainly put a big dent on qualification specially for Ecuador. Chile also must win this game to keep in race for 4th and 5th place as they trail Peru (4th) and Argentina (5th) by just 1 point. The match will be played on Thursday 05, October 2017. We will have live links right here on this page.

Chile vs Ecuador – FIFA World Cup 2018 Qualifier
South American Qualifiers – Round 17
Date: Thursday, 05 October 2017 – Time: 20:30 local time (00:30 am uk time friday early hours)
[ Live links will be available closer to the start of the match while full match highlights should be updated after the game is over ]

Short Match Preview: Estadio Nacional in Santiago will be the place where 44th edition of South American premier international competition “Copa America” gets underway with hosts Chile taking on Ecuador in the opening group a match.

Chile playing at home should go into the match as favourites and their 2014 world cup campaign was pretty good where they had a good tournmanet and much is expected from this golden generation of Chilean football. As far as the odds are concerned Chile are third favourites to go all the way and win the competition behind Argentina and Brazil.

Head coach Jorge Sampaoli has been instrumental in installing a winning mentality in Chile national squad and their performances since 2012 when he took have beer pretty impressive to say the least. Defeating Spain in the world cup 2014 group game was the high point and they won many admirers after they were cruelly crashing out of world cup in hands of fellow South America Brazil in the knockouts. 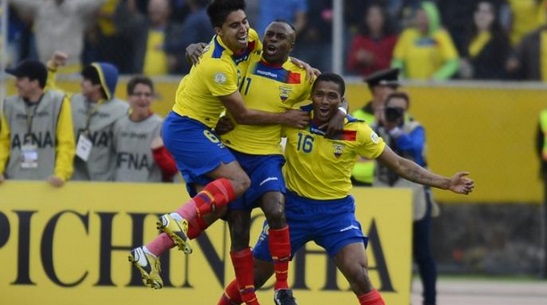 They have some qualify players in their lineup with the likes of Claudio Bravo (Bracelona Keerper), Gary Medel, Arturo Vidal (Juventus) and Arsenal hotshot Alexis Sanchez leading the line upfront. Ecuador on the other hand have been below par in recent years and they were knocked out in the 2014 world cup in group stages. As far as their Copa America experience is concerned they are without a win in last 9 Copa America games, their last win came back in 2001 while their overall copa america record is very poor with only four wins out of 22 matches they have played since starting playing in the competition in 1995.

Match Predictions: Ecuador has upper hand between the two sides if we look at their past 5 meetings since 2008 where Ecuador has won 3 times while Chile twice both of those matches were in Chile. So looking at past meetings, home advantage and star players in the team its easy to predict another home win for Chile and I cam going with a 3-1 win for Chilean side.