Denmark won their crucial opening game against Peru thanks to a solitary goal by Yussuf Poulsen who scored midway through second half to punish Peru for missing their fair of chances in first half. Peru were the better side overall but they lacked cutting edge while Denmark made them pay on a swift counter attacking move lead by Eriksen who charged through the center and sent Poulsen through on goal with a neat througball, Poulsen slotted home from on near post to make it 1-0. 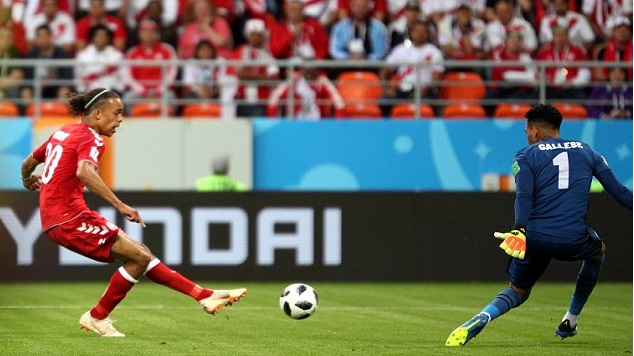 Peru have only themselves to blame really as they created more clear cut chances and had Denmark were there for the taking however missed chances proved costly with Denmark scoring in second half and after that they defend very well to see off the result.

Peru are set to start their campaign with the opening group C match against Denmark on Saturday, 16th June 2018 at the Mordovia Arena in Saransk. France play Australia in the other group C game which makes this one a very important game for both Denmark and Peru. It will be a competitive game as Peru are a hardworking side who are real stubborn and difficult to score against, Denmark on the other hand qualified via playoff when they defeated Ireland with their taltisman Christian Eriksen scoring hattrick away in Ireland to seal world cup place. He will be the main man and overall Denmark are slight favourites to not only win against Peru but to actually qualify for next round alongside France.

Denmark vs Peru Preview: Peru finished fifth in the South American qualifying round ahead of Chile who had same number of points but just -1 goal difference which allowed Peru inter continental playoff place against New Zealand. Where Peru failed to score in New Zealand but managed a 2-0 win to seal their progress world cup finals. Denmark also had similar qualifying finishing second behind Poland in and beating Ireland in playoffs to book their place in the finals.

The general feeling is that Denmark got a decent looking Group C where they are good enough to beat Peru and Australia and qualify alongside France. However winning their first match is pivotal otherwise needing two wins in the remaining two matches will make life harder.

Nicolai Jørgensen to start upfront who has been scoring goals for fun in Holland with Fayenoord last couple of seasons. Erikson is the key in 4-2-3-1 system surrounded by hard working players like Schone, Delaney, Sisto and Poulsen. Peru on the other hand have a player ironicly playing his trade in Denmark with Alborg, named Edison Flores who is a constant threat going forward. He alongside Farfan will provide much needed pace and width while Guerrero who has been cleared to play in world cup should start upfront.

ma Denmark look better side on paper but South American sides usually turn up against second rate European sides and that what I am expecting. Peru will be hard to breakdown and they might catch Denmark on the break. So its evenly poised and I am sitting on the fence in this one.