Chelsea are finally looking like a team who has desire and want to win games as they shown against Crystal Palace with a superb 3-0 away win with Oscar and Willian on target. Chelsea dominated the game against the London outfit at Selhurst Park and now sit 14th in the table with 23 points.

Chelsea defeated Crystal Palace on Sunday afternoon with a impressive 3-0 win which takes them 6 points clear of the bottom three. Chelsea started with Hazard, Oscar and Willian in the attacking roles behind Costa but an early injury forced Hazard out of the team. Diego Costa squared the ball for Oscar to score first of the day while Willian’s thumping first time shot was too good for Wayne Hennessey as it sneaked past him in the back of the net. 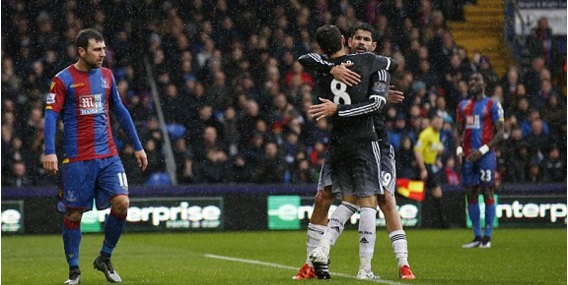 Costa found Oscar inside the box who tapped in for Chelsea’ first goal:. Oscar scored the opening goal of the game and it could not have come easier with a tap in. Cesc Fabregas picked out Costa with a superb through ball and he squared it for Oscar who made no mistake in putting the ball in the back of the net.

Willian superb strike made it 2-0 for Chelsea after the break: Chelsea started the second half in dominant fashion, controlling the ball superbly with Fabregas spraying the ball around. On a quick counter attack he found Oscar who layed-off nicely for on-rushing Willian who strike it first time and beat Hennessey with extremely well taken goal.

Eden Hazard started the game but could only last 15 minutes on the pitch as his on-going hamstring problems continue to hamper his full return to fitness.