You could not have written the script when England took on Iceland. It all started fairly positive for England when Iceland keeper Hannes Thor Halldorsson brought down Sterling inside the box and referee awarded the penalty while Rooney stepped up and scored for England in just 4th minute. Iceland replied straight back when a long throw in was flicked on into the patch of Sigurdsson who scored from close range to stun English fans. Iceland were not done yet as they put another past England and this time it was Sigthorsson who scored past Hart to put Iceland in the lad.

England 1-2 Iceland Highlights:
[ UEFA European Championship 2016 ]
04′ 1 – 0 Wayne Rooney scored from penalty spot after refree had given penalty when Hannes Thor Halldorsson brought down Raheem Sterling inside the box.
06′ 1 – 1 Ragnar Sigurdsson scored after a long throw in routine caught England off guard.
19′ 1 – 2 Kolbeinn Sigthorsson scored with a side footed finish which crept inside the goal after Joe Hart was late to react.

Roy Hodgson came under massive pressure as England struggled as usual in the group stages. They played well at times but never looked like getting into cruise mode even in what was a very straight forward group. If England were to get knocked out in the hands of Iceland it will be one of the biggest surprise in recent history of international football so they will be slightly under pressure while Iceland can just enjoy the day with not much to lose.

Possible Starting Lineups: Roy Hodgson made 6 changes in their last group game and they ended up playing out a 0-0 against Slovakia which cost them the top spot in the group. We can safely assume Hodgson will revert back to full strength side with Wayne Rooney, Kyle Walker, Danny Rose, Delle Alli, Harry Kane all starting on monday. Only selection headech will be whether to start with Daniel Sturridge or Jamie Vardy.

Iceland on the other hand dont have any injury worry and they are a very predictable team as far as their team selection is concerned. Iceland alongside Spain are the only two teams of 24 who started with the same lineup in three group games. 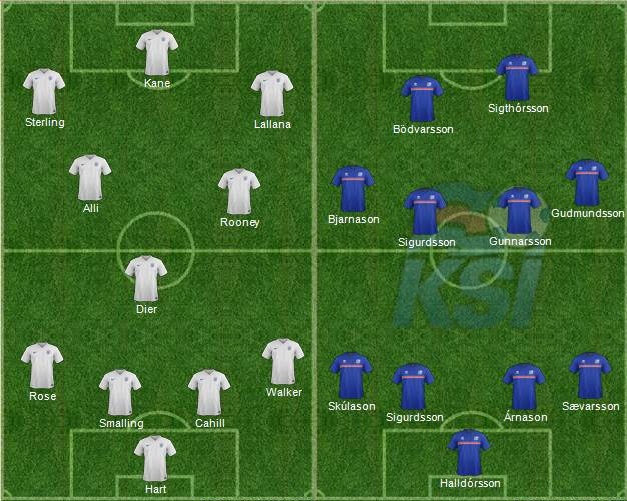 Last time these two meet was back in 2004 when England ran out 6-1 winners and its foolish to think of a similar scoreline on Monday night but we can safely assume England to nick this game one way or the other. Iceland’s only chance of getting a goal is through set-pieces and throw-ins around the penalty box. Another way to look at this game is England’s unbeaten record in European championships since 2004 as they have won 5 and drawn 5 in normal time (excluding defeats on penalties). So if Iceland were to knockout this English side they it will be the biggest upset in history of European championships and we can expect a few “Brexit” jokes. Having said that I am going with a comfortable 3-0 win for England in this one.