Manchester City goes top of the table with 9 points of the first three matches as they comprehensively defeated Everton at Goddison Park on Sunday.

Manchester City has eventful first month in the premier league season so far, not only they have taken the maximum points in the three matches played including a massive win against Chelsea and Everton they are the highest scoring team in the league as well. They defeated Everton in sunday’s Premier League clash where Kolarov and Nasri scored in second half to make it 2-0 win for City.

Everton vs Manchester City Short Preview: Everton has made a steady start to their 2015-16 premier league campaign having register a draw and win in their opening two games, their last weeks 3-0 win over Southampton will make Manchester City a little uncomfortable because this is a fixture where City usually struggle. In the 2014-15 league game at Goddison park, Everton held City to a 1-1 draw when Steven Naismith scored minutes after City took the league. Manuel Pelligrini is unlikely to change the starting lineup and City fans will have to wait to see Nicolas Otamendi making debut for his new team.

Everton will have Kevin Mirallas back after passing fitness test but they will be without the likes of Captain Baines, Darron Gibson, Tony Hibbert and Steven Pienaar who are all sidelined due to injuries. Manchester City’s David Silva will be the main man in this game as he connects midfield to forward line while City will be happy with the form of senior players like Yaya Toure, Kompany and Aguero. Everton has scored 5 goals in the opening two matches where Romelu Lukaku produced an inspired 2 goal performance against Southampton and Ross Barkley has scored in both matches so far.

This is how I expect both teams to line-up this sunday afternoon. 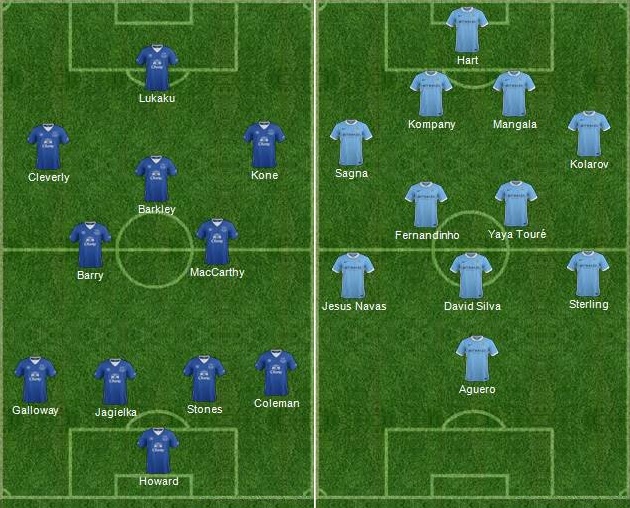 Extended Match Highlights: Once the match is over, streaming will be removed and goals video and full match highlights will be available after the match. You can also watch extended BBC motd video later in the night.