Absolute cracking first half performance from France saw them put 4 past pretty much helpless Iceland side. Olivier Giroud scored the opening goal when he beat the offside trap and found himself one on one with keeper, he slotted through Keeper’s legs to put France in front. Paul Pogba thumping header in 20th minute made it 2-0 followed by two quick goals just before the break from Dimitri Payet and Antoine Griezmann.

Fairy tale run of Iceland came to an abrupt end as France came out stronger in the first half. They absolutely hammered Iceland and brought right back down to earth. Goals from Giroud, Pogba, Payet and Griezmann had put France in commanding 4-0 lead as we went into the break.

France 5-2 Iceland Highlights
[ European Championship 2016 Quarterfinal ]
13′ 1 – 0 Olivier Giroud scored with a class finish between keepers leg to put France 1-0 up.
20′ 2 – 0 Paul Pogba header on the corner kick routine made it 2-0 as France went into cruising mode.
43′ 3 – 0 Dimitri Payet continued his goalscoring form with a another superb goal with a low left foot drive in the bottom corner.
45′ 4 – 0 Antoine Griezmann made it 4-0 just before the break to put the tie to bed.
56′ 4 – 1 Kolbeinn Sigthorsson scored just after the break but it was not more than a consolation goal.
59′ 5 – 1 Olivier Giroud headed home the fifth for France
84′ 5 – 2 Birkir Bjarnason found the back of the net to make the scoreline less embarrassing.

Iceland’s 2-1 win over England is widely regarded as the biggest upsets in history of European championship and this Iceland side has something about them which will be making French squad nervous. Hosts will be mighty favourite going into the match but Iceland will go into the game without any pressure and should put a decent fight on Sunday. Looking at the team sheets its hard to see any other result than a France win and hosts will be even more up for the game after Iceland’s surprise win over England so no margin of complacency.

France will be without two first team players in N’Golo Kante and Adil Rami (both suspended) which means Umtiti and Cabaye to start in their respective roles. Olivier Giroud is set to be dropped from starting lineup with Griezmann leading the attack with Coman, Payet and Pogba providing support in attack.

Iceland dont have any injury worries of suspensions and we can safely assume they will start with the same lineup which pretty much outsmart England to reach this far. 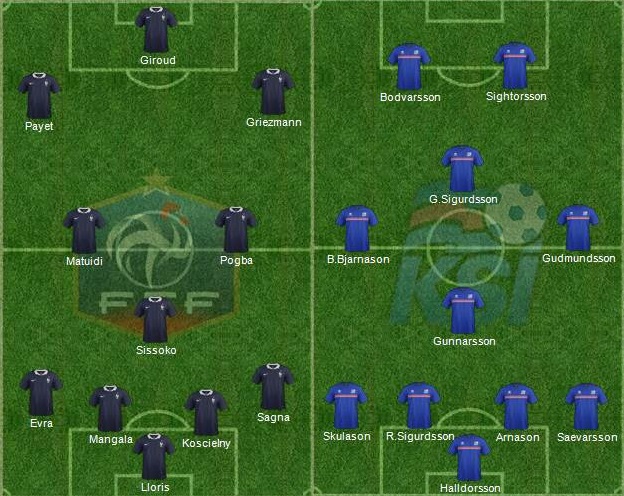 The game will be the 9pm kickoff on Sunday and we will have live streaming links 1 hour before it all begins with BBC one coverage. We will also play couple of alternative links closer to kickoff. But if for some reason you missed the live action, you can always tune in here for full match highlights.

Its hard to see Iceland repeating what they did against England but this Championship has been very unpredictable. Portugal are in the semifinals without winning a game. Wales has already dis-mental Belgium and people now expect another mircale of Iceland getting the better of home nation France which will be uphill task but not impossible. I am going with a easy France win in this one.