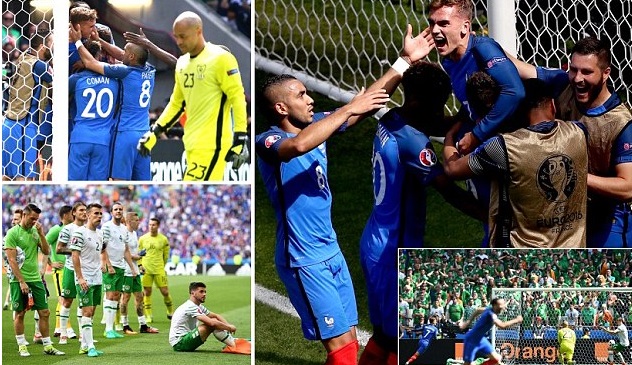 Republic of Ireland went into the round of 16 clash against Hosts France with nothing to lose having already achieved their goals of making it to the knockouts. But they put France underpressure from the minute go and took the lead in just 2nd minute of the game. Shane Long was brought down inside the box by Paul Poga, referee awarded the penalty, Brady stepped up and scored to make it 1-0 leaving home fans shell shocked. Antoine Griezmann equalized after the break to bring France back into the match

Ireland lead France 1-0 as both teams went into the break. Ireland could not have asked from a better start with Brady scoring from penalty spot in just 2nd minute to give them the lead. France played better but lacked that cutting edge for most part. But they do have a full second half to turn things around and thats exactly what happened after the break

France came roarding back into the game when Griezmann scored twice inside three minutes to completely change the complexion of the game. There day got even worse when Shane Duffy was sent off with straight red card.

France 2-1 Republic of Ireland Highlights
[ UEFA European Championship 2016 – Round of 16 ]
02′ 0 – 1 (pen.) Robert Brady scored from penalty spot to give Ireland the early lead after Shane Long was brought down in the box by Paul Poga.
58′ 1 – 1 Antoine Griezmann equalized for France in 58th minute and had enough time to win the game with 30 minutes on the clock still remaining.
61′ 2 – 1 Antoine Griezmann scored again minute later to put France in front.
66′ [ Red card ] Shane Duffy was sent off from denying Griezmann a clear goal scoring opportunity.

Republic of Ireland qualified as one of the four best third place teams having lost two group games and winning the last against Italy. Martin O’neill and Roy Keane has been very vocal about their chances going into the big game and since France are playing at home they will be slightly under pressure which makes this encounter a very interesting battle.

Team News & Lineups: So far not many teams has taken a hiding as majority of the games have been very close and could have gone either way and we can expect another close game between Ireland and France on Sunday. Ireland do have some selection headech going into the round of 16 tie as Stephen Ward and Jonathan Walters both doubtful for French clash. Brady should start while Wes Hoolahan, John O’shea and Ciaran Clarke will be starting on the bench.

French coach Didier Deschamps has tinkered quite a lot in the opening three games but as we move to the quarterfinal stage we can expect him to name his full stength side with both Paul Pogba and Antoine Griezmann are expected to start with Olivier Giroud leading the attack Kante N’Golo starting in central midfield role. 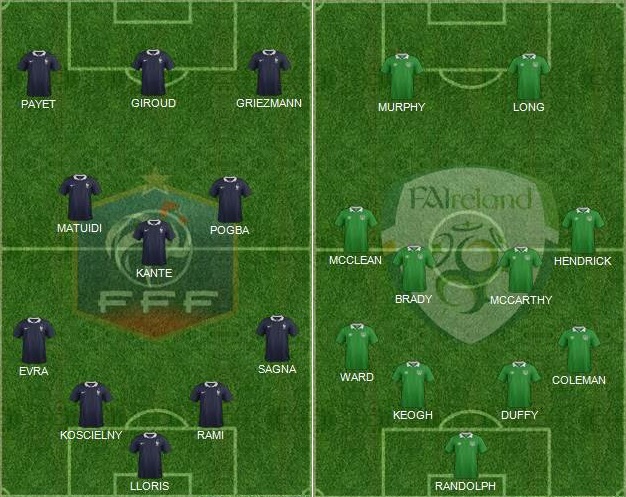 Match Predictions: Republic of Ireland made history with a massive win over Italy which enabled them a place in knockouts. They have already achieved their target and should go into the game without any pressure which means more fluid footblall. France on the other hand has failed to live up to expectations apart from Dimitry Payet who has been sensational so far. I am going with another close encounter and France to win it with odd goal.