Hosts France took on World Champions Germany in the second semifinal of 2016 UEFA European championship and it turned out to be another cracking game between the two. Germany dominated the best part of first 45 minutes but failed to score and that came back to haunt them as France took the lead just before the break when Bastian Schweinsteiger handled the ball inside the box and Antoine Griezmann scored from resulting penalty to put homeside in the lead. France started better in second half and the eventually killed the tie when Griezmann scored his 2nd of the night and 6th overall in the tournament.

France 2-0 Germany Highlights
[ UEFA European Championship 2016 Semifianl]
45′ 0 – 1 (pen.) Antoine Griezmann put the home side 1-0 up at the stroke of half time from penalty spot.
72′ 0 – 2 Antoine Griezmann scored again in second half to put the game to bed with a close range after after Neuer failed to clear Pogba’s cross properly.

[ Live streaming links for Fra-Germany semifinal will be available 30 minutes before the kickoff on Thursday night, 07 July 2016 ]

Germany-France is a very balanced match and looking at the recent history, France is one team, Germans don’t like playing against. Sine 1990 France has got the better of Germany for most part winning 6, drawing 2 and losing just 1. But that one defeat came back in the 2014 FIFA World Cup quarterfinal. Last time these two meet was back in November 2015 in Paris when the city was rocked by terrorist attacks.

Antoine Griezmann is one player Germany can not let lose, he has already scored 4 goals in the tournament and will be hunting golden boot while Dimitri Payet and Paul Pogba also offer greater attacking threat than any of the teams Italy has faced so far. 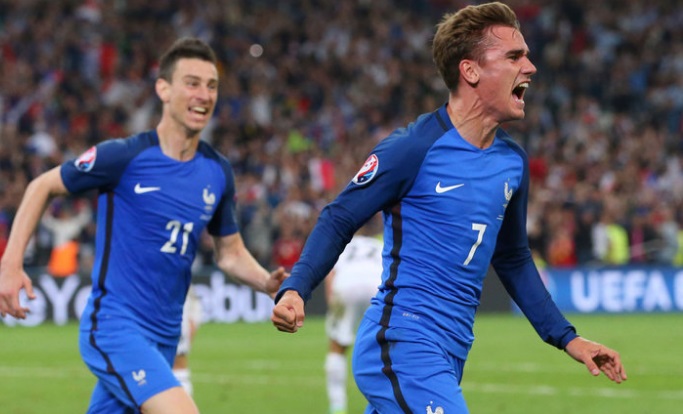 France will be confident after their incredible 5-2 win over Iceland and important players like Giroud, Pogba and Griezmann got onto the scoresheet. However Didier Deschamp will have some selection worries whether to start with N’Golo Kante or keep the fluid midfield with Blaise Matuidi and Moussa Sissoko. Adil Rami is set to return replacing Samuel Umtiti while rest of the team should remain the same.

Germany on the other hand has injury crises with only recognized striker Mario Gomez ruled out for rest of the tournament while Bastian Schweinsteiger and Sami Khadira are both doubtful. Matts Hummels is also suspended and will miss the semifinal leaving Joachim Löw to improvise with his selection. 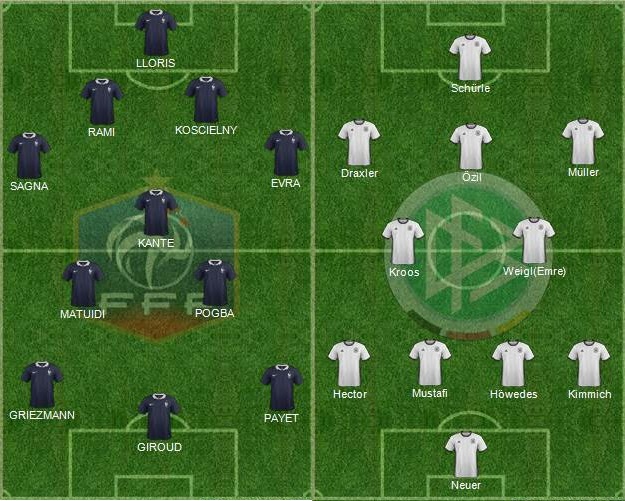 Germany has looked in control for most part in the tournament even against Italy they should have won it in normal time but a crazy handball by Jerome Boeteng paved the way back for Italy. Having said that France will pose greater attacking threat specially playing in their own backyard plus Germans will be without several key players which makes this game a 50/50.

Match Predictions: Playing at home can help the team and also put unnecessary pressure, France will be hoping to use home support to their advantage against World Champions Germany who regardless of the opponents play their natural free flowing game and defend higher on the pitch. If France start with Payet, Giroud and Griezmann upfront they will be playing into the hands of Germany because of the lack of pace. Unless France start with either Martial or Coman I can’t see them troubling Germany back four. I am going with a 2-1 win for Germany in this one.