World Champions Germany took on Italy in an attempt to beat their boggy team for the first time in last 8 matches in major tournaments. Both teams had good chance to take the lead in opening first 45 minutes but overall it was a very underwhelming performance from both sides which will only suit Italy. However Ozil strike in second half put Germany in lead and just when it looked like they are dominating and will see it through Italy equalized via penalty when Boeteng handled the ball inside the box. Both teams failed to score winning goal leading to penalties where Germans held their nerves to win the battle 6-5 and qualify for their sixth successive major tournament semifinal.

One of the most high profile games in the tournament yet as Germans meet Italy with so much history between the two it was expected to be a close affair and so it unfolded. 1-1 in normal time and extra-time lead to penalties where Germany finally win their first game against Italians in major tournament.

Overall the game was a dull affair for most part as Italy defended in numbers and made it very difficult for Germany to get their free flowing football going.

So after the first 45 minutes we had a the expected result where both teams canceled each other out. Germans started with unusual 3 at the back with packed midfield to counter Italy style which was a surprise for many. The game is still 0-0 as we right this piece but we will be updating this page immediately after the game with full match highlights.

Preview & Team News: Germany has won all of their games except that 0-0 draw against Poland in the group stages but in all fairness this quarterfinal tie against their old nemesis will be their biggest test in the tournament. Italy seems to have the number of Germany when it comes to major tournaments and their most recent encounter was back in 2012 Euro when Italy ran out comfortable 2-1 surprise winners in the semifinals. However things has changed since than as Germany went on to win the 2014 World Cup while Italy has lost most of their big name players but that does not mean Italy will get rolled over looking at their performances in this year’s tournament.

Italy are coming into this game on the back of a massive 2-0 win over defending champions Spain and although they will be underdogs against Germany, you can not rule out Antonio Conte’s very hard working team who can pull out a surprise here. 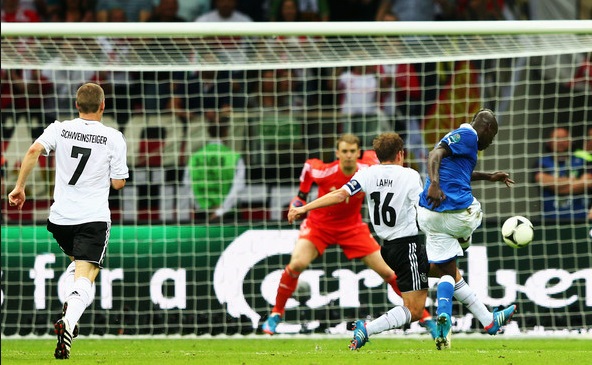 Last time these two meet in competitive game was back in Euro 2012 semifinal when a certain Balotelli scored brace to beat hot favourites germany. Will history repeat itself or Germany will finally break the shackles ?

Expected Lineups: Going into the game Italians have some selection headache with Daniele De Rossi and Antonio Candreva still doubtful while Thiago Motta will miss the game through suspension. Alessandro Florenzi impressed against Spain and he might be given another go at the Germans.

Germany on the other hand has a full squad to choose from and they also have extra days rest. Mario Gomez should keep his place upfront with Julian Draxler, Ozil and Muller playing in attacking roles. 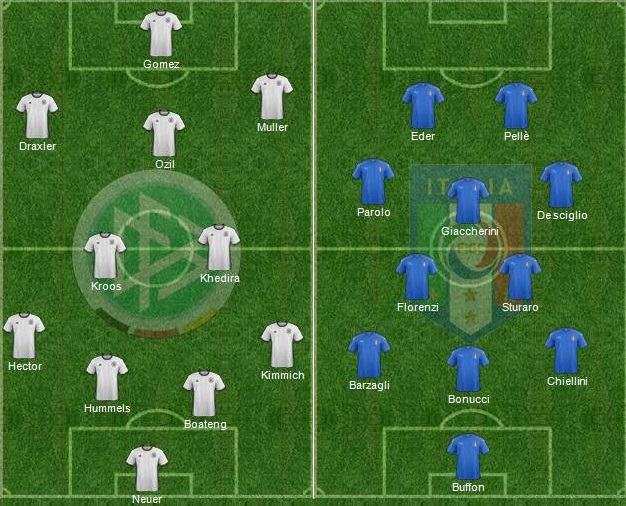 Like we mentioned before Italy has the number of Germany when it comes to major tournaments and they have not beating italians in the past 8 competitive meetings between the two sides. On paper this Italy side is very mediocre but Antonio Conte has installed what i like to call workhorse mentality who will surely frustrate Germany for best part of 90 minutes. The different between the two sides will be that odd goal and whoever scores first will win this one. I can see Italians pulling off a surprise win here with narrowest of margins.