Germany are set to visit Ireland as they take on Northern Ireland for the European World Cup qualifier in Group C game this Thursday night, 05 October 2017. Its a massive game for Northern Ireland who can book their place in the finals with a win while Germany has already qualified for the world cup 2018. Even a draw will ensure Ireland a place in next year’s finals. We will have live links of this game right here on this page 1 hour before the kickoff.

Germany finally started with a recognized forward in Mario Gomez and the move paid back when he scored Germany’s third goal of the tournament and first of the day in 30th minute to put them in the lead. Germans dominated the game throughout the first half and should have put the game to bed with the kind of chances they had. Thomas Muller hit the woodwork and missed couple of easy chances but German defense never gave Northern Ireland a sniff at the goal.

Germany 1-0 Northern Ireland
[ European Championship 2016 ]
30′ 0 – 1 Mario Gomez scores at the half hour mark to put Germany 1-0 up. In all fairness they should have killed the game off in first half with the kind of chances they had.

So there is all to play for as we head to final set of group games. Currently Germany are top of the table with 4 points only ahead on goal difference to Poland who also have 4. While Ireland win against Ukraine put them 3rd with three points and Ukraine has 1 point leaving the door open for all teams from this group as we head to last round of group games. Germany vs Ireland will be played at the Parc des Princes in Paris starting at around 18:00 local / 17:00 uk time.

Expected Lineups: Norther Ireland made history winning their first ever match in major tournament in about 30 years when they got the better of Ukraine. Now manager Michael O’Neill has a selection headech going into the Germany game whether to stick with the same unit or make some changes to bring in stability in defence. Conor McLaughlin and Manchester United youngster Paddy McNair might be considered to provide extra support for defence while top scorer Kyle Lafferty might also be considered for start.

Germany on the other hand failed to score in their first game since 2004 in any of the major tournaments and national team coach Joachim Low might be forced to start with a recognized striker in Mario Gomez in place of Mario Gotze who has looked out of sorts. This is how I expect both teams to lineup. 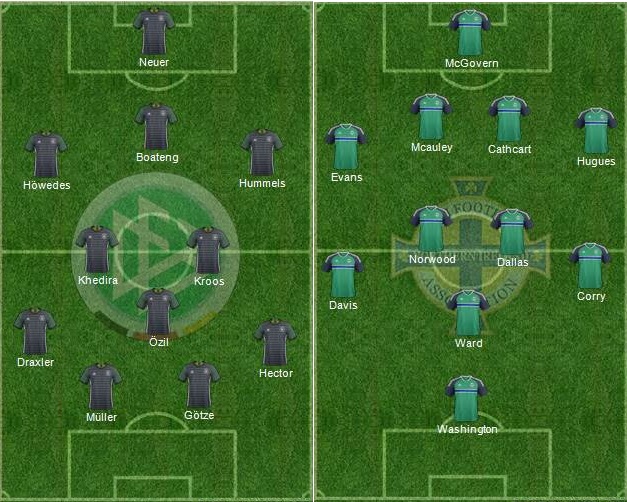 Predictions: I expect Germany to bring back their efficiency when they take on Ireland. I can’t see Northern Ireland posing any threat for Germans specially if they start with Mario Gomez upfront who is due a couple of goals. I am going with a 3-1 win for Germans in this one.