Italy took on Ibrahimovic and co in their second group E game in persuit for sealing their qualification to next round. Sweden however had other ideas as they put a decent performance in the first half going toe to toe with Azzurri but both sides cancel each other out in what was a very underwhelming first 45 mintues. Game was 0-0 at the break and Sweden had to come out stronger in second half and get three points to keep themselves in the competition. Eder scores late in second half to earn second win for Italy and book their place in knockout stages.

Chiellini put in a hopeful long thrown which was meet by Zaza who flicked it on to Eder path and he produce moment of magic beating couple of Swedish players and curled in the far post. Stunning goal, impressive performance and knockout berth for Italy.

Many beleived this is one of the most light weight Italian team in ages and few gave them a chance of excelling in Euro 2016. But in typical Italian fashion they proved the doubters wrong when they outsmart, outplayed and pretty much outclassed one of the favourites in Belgium. Now the most difficult game (atleast on paper) is behind them and all they need is a win in next two games to seal their qualification. Sweden on the other hand also need a win to keep their chances in their own hands.

Ibrahimovic was criticized for his somewhat lackluster display against Ireland and he will be up for the challenge against Italians where if he scores will make him the very first player with goals in four consecutive European championships. He will start upfront and national team coach Erik Hamren has urged his attacking players to provide more support for their talisman to make full use of his abilities. Sweden’s only selection worry is Mikael Lustig who suffered a groin injury.

Italy on the other hand has some selection head as Matteo Darmian is likely to be dropped (injury concerns) while Pelle who came on second half sub to score against Belgium might start upfront. Here are the possible starting lineups of both teams. 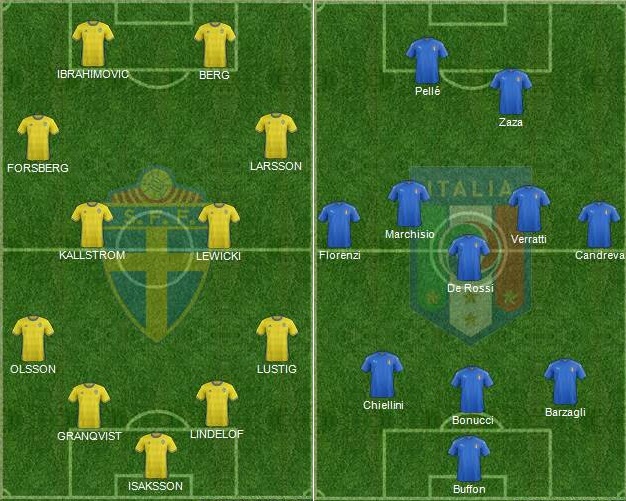 Sweden looked below par against Ireland and should feel lucky to have come away with a point with the help of own goal. Italian pride themselves on their defense and I can’t see Sweden attacking options causing any major goal threat against Italy. I am going with a comfortable 2-0 win for the Azzurri on Friday.