Belgium came from 2-0 down to win the game 3-2 with absolutely last kick of the game in what was a incredible second half. Japan will be heart broken as they took the initiative scored two quick goals at the start of second half but crumbled when Belgium made changes and conceded last minute winner. 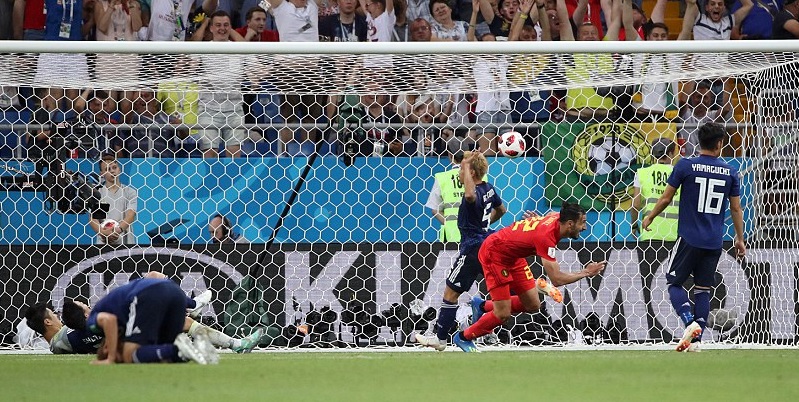 Genki Haraguchi and Takashi Inui scored two quick goals after the break and Belgium looked out of sorts for some time. But it all changed when Roberto Martinez rang the changes with Fellaini, Chadli coming on and scoring the equalizer and the winner respectively.

Belgium finished the group stage with 100% record winning all three of their games and scoring 9 goals conceding just 2 so far in the tournament. Winning the group means they play Japan in the last 16 tie on Monday, 02 July 2018 at the Rostov Arena in Rostov-on-don in a game which will kickoff at around 20:00 CET / 19:00 uk time. Japan qualified as group runners-up with the help of bizarre rule of fair-play rule which we explain below.

Belgium vs Japan Preview: After Japan and Senegal finished on same points, same number of goals scored and conceded and a 2-2 draw between them, FIFA had to use fair-play rule “team with less yellow cards” qualify for next round. It was a cruel way for Senegal to go out specially considering Japan’s performance in 1-0 defeat against Poland in their last game. Japan literally decided to not attack Poland after they knew Senegal are losing against Colombia. But now thats history, they are in the last 16 and play one of the most inform team in Belgium on Monday night.

Belgium defeated England in their last group game with heavily changed side and qualifed as group winners. Adnan Januzaj scored a stunning goal which was the difference between the two sides. Roberto Martinez will bring back all the big guns for round of 16 tie and this is how I expect both teams to lineup.

Belgium top the group G after beating England 1-0 in their last group game. Both teams made 9 changes in the starting lineup and it took a wonder goal from Januzaj to break down England. However it is highly unlikely Januzaj will play any part against Japan.

Possible Starting Lineups: Belgium will have top scorer Romelu Lukaku back in the starting lineup with Hazard and Dries Mertens playing in attacking roles while De Bruyne and Witsel playing in central midfield roles. Yannick Ferreira-Carrasco and Munier to keep their place as wing backs. Dedryck Boyata, Vertonghen and Alderweireld will make up the back three. 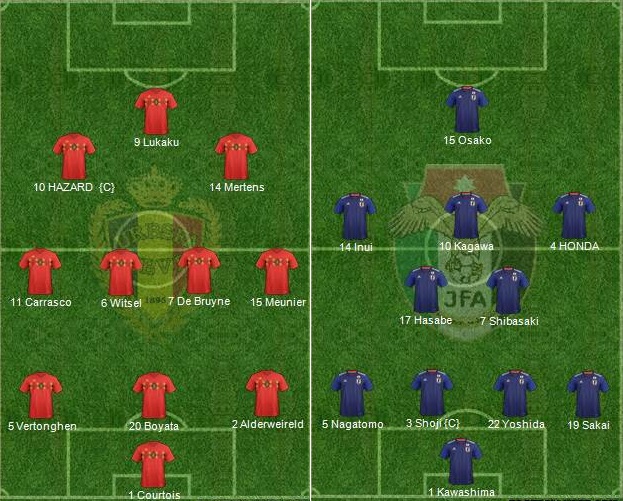 Japan should keep their trusted 4-2-3-1 system where Kagawa plays as no.10 while Osaka to lead the attack. Japan do not have any major injury worries going into the last 16 match against Belgium.

Match Predictions: Belgium are one of the most inform national team in the world at the moment. The are odds on favourites to win against Japan and rightly so considering the talent at their disposal. Japan will try to frustrate them but when you have players like De Bruyne and Hazard pulling the strings from midfield and Lukaku scoring goals for fun it should not be a difficult job for Belgium to get through Japan. I am going with a comfortable 3-1 win for Belgium in this one.