Juventus scored an early goal through Real Madrid outcast Alvaro Morata in 9th minute but a headed goal from Cristiano Ronaldo made it 1-1 before the break which was followed by Carlos Tevez Penalty in the second half in the first leg of 2014-15 Champions League semifinal.

It took just 10 minutes for former Real Madrid player Alvaro Morata to put the ball in the back of the net with an easy tap-in after Carlos Tevez found unreal space in Madrid box. Tevez produced a low hard shot at the far post where Iker Casillas could only parried the ball which fell nicely for Morata to make it 1-0 for the home side. 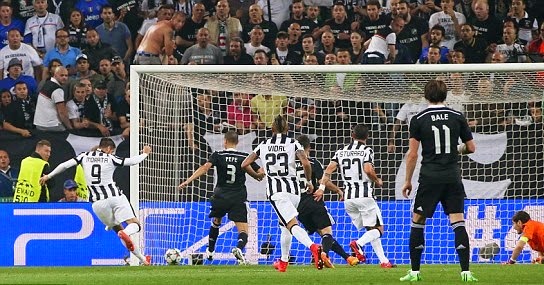 Morata scored within first 10 minutes of the kickoff to put Juventus 1-0 up against Real Madrid.

James Rodriguez was involved in a great build on the right side of Juventus defense and he produced a superb volley cross and setup Ronaldo with an easy header who made no mistake in putting the ball in the back of Buffon net. It was Ronaldo’s 55th goal of the season and 9th in Champions League this season. 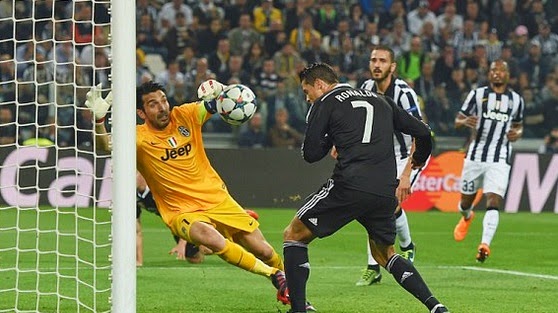 Ronaldo scored the all important equalizer for Real Madrid and his ninth in champions league this season.

The game was 0-0 at the break and after the halftime both teams kind looked like canceled each other out with bodies behind the ball. But a counter attack out of nowhere lead to Carlos Tevez running at Real Madrid defense and he forced Danial Carvajal to tackle him in the box which resulted in the penalty. Former United player Tevez lined up to take the penalty and put passed Casillas straight through the middle to give the home side 2-1 advatage. 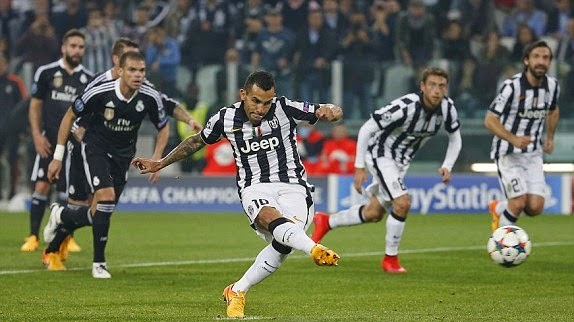 The game ended 2-1 for Juventus but how important that Ronaldo goal will prove for the European Champions ? Real Madrid had a poor game but they will be happy to take the result back to Bernabue and all they need is a 1-0 win which will secure second consecutive berth in the final of champions league.