Turning point of the game was that Danny Simpson sending off, until that point Leicester City matched Arsenal in every department and looked more dangerous on the counter attacks having taken the lead just before the break.

Arsenal took on Leicester City in the top of the table clash on Valentines day and it turned out to be a cracking game full of action both halves. Arsenal started stronger but it was Leicester City who took the lead when Monreal brought down Jamier Vardy inside the box and penalty was awarded which was converted by Vardy to put Leicester 1-0 up scoring his 19th of the season. Danny Simpson was sent off for two bookable offences in second half. Walcott and Welbeck came on sub in second half to score goal piece winning important three points for Arsenal.

Arsenal vs Leicester City Preview Leicester City can really get a stronghold on the title race if they can produce another miracle performance against Arsenal. A win for Leicester City will put them 8 points ahead of Arsenal and if Manchester city and Tottenham game ends in a draw that will end Leicester with 7 clear overall with just 12 games to play for.

But the way this season results has gone so far I expect Arsenal to win at home and keep the title race well within reach of any of the top 4 or even 5 teams. Leciester City has not beaten Arsenal at home since 1973 while they have not beaten Arsenal in last 18 games between the two in all competitions which shows the rask Claudio Ranieri men are facing this weekend. 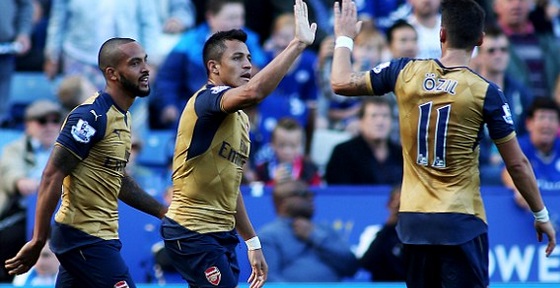 Arsenal has a full squad to choose from apart from their long-term absentees like Wilshere and Welbeck. I expect Giroud to lead the lineup alongside Ox-Chamberlain and Alexis Sanchez with Ozil, Ramsey and Flamini playing in central midfield roles. Leicester will continue with Okazaki and Vardy upfront while their star playmaker Mahrez to start on right side of the midfield. This is how I expect both teams to lineup. 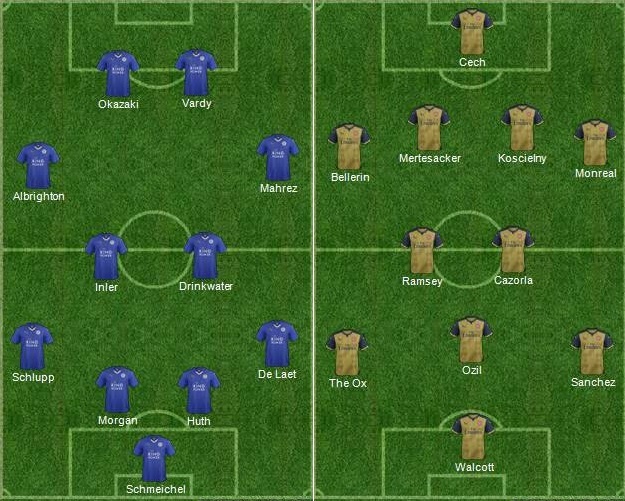 Match Predictions: Last time these two meet was back in September when Arsenal ran out 5-2 winners at King Power stadium. Leicester will be much more compact this time as they don’t need to win this game. Arsenal will likely to dominate possession while foxes will be hoping to catch them on the break just like last weekend where they beat Manchester City. I think both teams will score on Sunday but Arsenal playing at home with so much riding on this game will likely to win this game with a narrow margin.