Liverpool are set to take on Brighton & Hove Albion in the last weekend of premier league 2017-18 season this Sunday, 13th May 2018 at the Anfield Stadium in Liverpool. The game holds significant importance for Liverpool who must get at least a point to secure their top four finish while Brighton who are safe now from relegation should go into the game confident of their chances. The match will be part of all 10 games kicking off at the same time on Sunday starting at around 3 p.m uk time.

Brighton vs Liverpool Team News & Lineups: Brighton & Hove Albion has had a very good start to the season currently sitting comfortable at 10th position in the league with 17 points. They have only lost one of the 7 home games although they could only manage two wins at home and 4 draws. Liverpool on the other hand are not very good travelers as their record suggest, winning just 3 of the opening 7 away games but they will be odds on favourites to get all three points on Saturday and get closer to the top 3 in the league.

Brighton don’t have any new injury worry and full squad to choose from. The only absentee will be Steve Sidwell who has been ruled out with the back pain. We can expect Brighton to start with Jose Izquierdo and Markus Suttner who also started against Crystal Palace in the midweek derby game. Liverpool are most certainly set to recall two goal hero Mohammad Salah in the starting lineup with Firmino and Mane playing in three man attack. Wijnaldum, Coutinho and Henderson to start in the central midfield roles.

This is how I expect both teams to lineup on Saturday afternoon. Confirmed teams news available 1 hour before the kickoff. 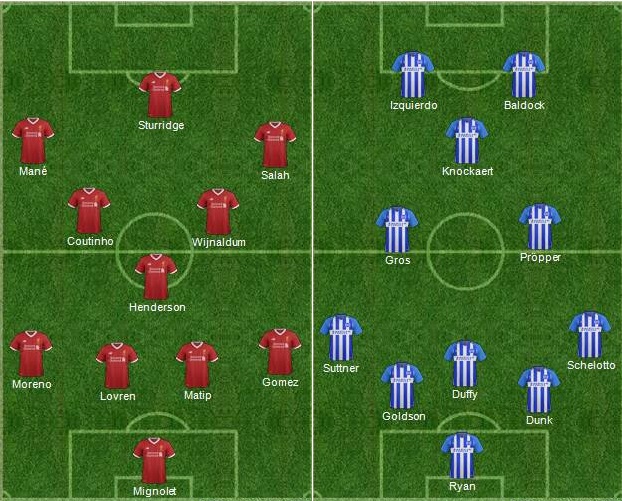 Match Predictions: Liverpool can blow hot and cold but going into the Brighton game they will be confident after putting on a good performance against Stoke City in midweek. Another win will only enhance their chances of breaking into the top four and that is the revised target this season. Brighton on the other hand are a very hard team to break down specially at home. If they can frustrate Liverpool for longer periods in the game they might have a chance. But I am going with a comfortable Liverpool win in this one and possible Mohammad Salah getting on the score-sheet again.