Liverpool took on Aston Villa in the premier league game on Sunday and it turned out a sweet win for Jurgen Klopp side who scored twice inside first 30 minutes to go 2-0 up. Daniel Sturridge opened the scoring in 16th minute while James Milner added the second to get Liverpool in a commanding position in first half. Liverpool scored four more goals inside 15 minutes in second half to make it 6-0.

Absolute superb performance by Liveprool as the blitz past Aston Villa 5-0. Sturridge scored the opening goal while Milner’s freekick beat everyone and found its way into the back of the net. Liverpool added three more in second half with Emre Can scoring with a low hard finish, Origi came on as a sub and scored within 27 seconds. Clyne scored from a rebound to put 5th past helpless Villa.

Liverpool vs Aston Villa Preview: Liverpool are currently 9th in the table with 35 points, 12 behind fourth place Manchester City and realisticly their chances to qualify for Champions League are long gone but Europa League positions are still pretty much in sight if Liverpool can put together good run of results from now to the end of the season.

Liverpool are coming into this game on the back of a 2-1 defeat against West Ham united in the FA Cup replay which lasted 120 minutes and a late goal in second half of extra time for West Ham knocked Liverpool out of the competitions. It might have an impact on Liverpool squad fitness as they have been the most busiest team in top flight having played two games week and week out since the start of the year.

Possible Starting Lineups Liverpool vs Aston Villa:As far as the team news is concerned Jurgen Klopp will be happy with how Sturridge came on as a sub and played some decent football while Philippe Coutinho announced his comeback into the team with a superb freekick goal. Christian Benteke is likely to be on the bench after terrible performance in front of the goal where he missed several easy chances. So we can exepct Sturridge, Firmino and Coutinho to start upfront while Milner, Henderson and Lucas Laiva is set to play in midfield roles. 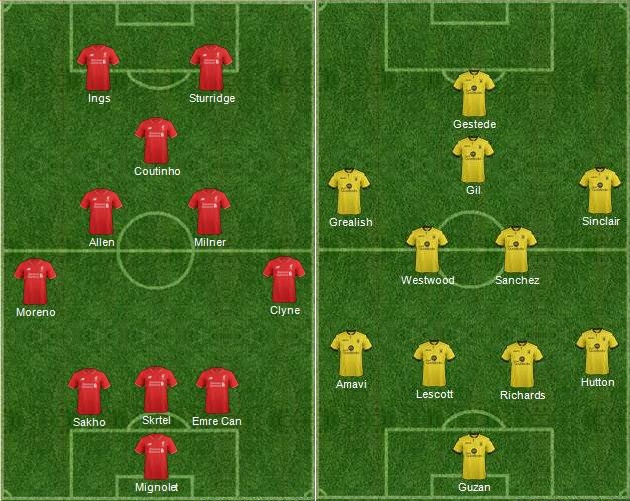 Last time the both sides meet was back in September 2015 when Liverpool recorded a 3-2 win over Villa at Anfield, Daniel Sturridge started that rare game and was on target twice while Rudy Gestede also scored two headers to make things interesting towards the end of the match. Liverpool are going through a difficult patch in form but I expect them to turn things around as some of the key players are getting back to full fitness. I am going with a 2-0 win for Liverpool in this one.