After playing out a 0-0 draw in the first leg against Augsburg last week, Liverool hosted the germany side at Anfield on thursday night. James Milner Put Liverpool 1-0 up in first 5 minutes when they were awarded a penalty, Milner stepped up and scored from the spot to make it 1-0 for Liverpool. However that goal did not change the equation for Augsburg who had to score no matter what. Both teams went into the break with game at 1-0.

Liverpool made it through to the round of 16 in Europa League after a narrow 1-0 win on aggregate agains Augsburg over two legs. James Milner’s penalty goal was enough to see off german side.

This is the first time Augsburg has qualified for the knockout stages european competition and although they are struggling in the league this season they can be a touch team to play against. Liverpool on the other hand rarely take this competition as priority as each of the last two seasons they were dumped out in the Round of 32 stage. Jurgen Klopp however has a great history of doing well in both Europa League and Champions League with Dortmund and we can expect the same with Liveprool. 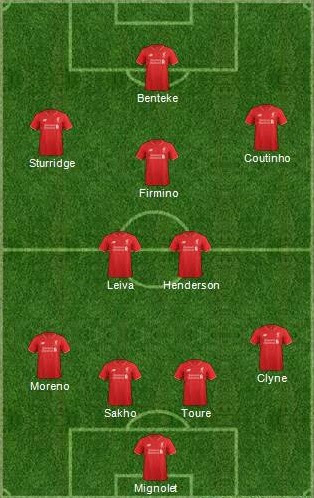 Team News & Starting Lineups: Klopp is likely to field some of the fringe players in this tie but that does not mean he don’t want to win Europa League. He and Liverpool know if they can win this year’s competition will secure Champions League place which otherwise hard to get as the things stand in premier league.

There are couple of injuries for Liverpool as Adam Lallana and youngster Kevin Stewart ruled out for the Europa League clash but Lucas Laiva and Sturridge should be fit to start while Philippe Coutinho and Divock Origi are also in contention to play some part on thursday. Confirmed team news will be available couple of hours ahead of the kickoff and we will update the starting lineups here.

The game is set to kickoff at 20:00 uk time with BT Sports broadcasting live immediately after Manchester United match. This will be the first leg while the 2nd leg will be played next week on Thursday, 25 February.