Liverpool are set to visit Burnley for the premier league game on new years day 01 January 2018. Liverpool has a chance to go level on points with third place Manchester United side and within a point of second placed Chelsea while Burnley will be hoping to repeat their recent success against Liverpool. The game kicks off at around 15:00 uk time and we will have live links closer to the kickoff right here on this page. If you missed the live action, you can always tune in here for full match highlights afterwards.

Quite interestingly both Liverpool and Burnley have similar points after the opening four games but its actually Burnley ahead on goal difference going into the match. Liverpool are pretty good going forward but their defensive issues have been exploited but teams already this season. However with Philipe Coutinho ready to wear the Liverpool shirt again, Jurgen Klopp will unleash full strike force on Burnley at home with Firmino, Salah, Mane and Coutinho playing in attacking roles.

Last season Liverpool won one and lost one against Burnley which goes to highlight their problems against midtable teams who park the bus and play on counter attacks. Burnely will deploy same strategy again on Saturday and if they can frustrate Liverpool they do have a chance of catching them off guard on counter attacks. 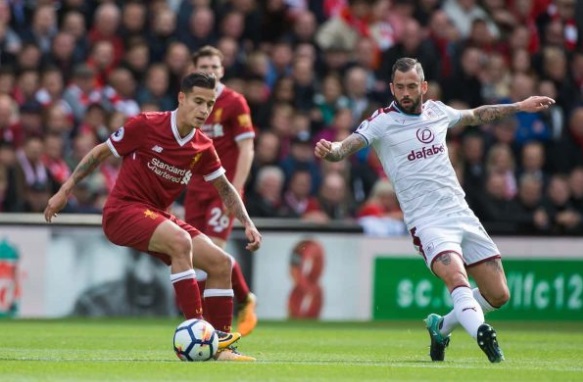 Last time these two meet was back in September when Burnley held Liverpool to a 1-1 draw at Anfield. Sean Dyche men will be looking for a similar result at home to keep up the pace at top half of the table.

Burnley defeated Liverpool earlier in the season back in August at Turf Moore but its hard to see them getting anything at Anfield.

Liverpool 2-1 Burnley – March 2017
[ English Premier League 2017 Match ]
07′ 0 – 1 Ashley Barnes scores early in first half to stun Anfield. The goal came on a swift counter attack move as Barnes slotted home from close range.
45′ 1 – 1 Georginio Wijnaldum equalized for Liverpool just before the halftime to make it 1-1 on the day.
61′ 2 – 1 Emre Can scores absolute stunner to put Liverpool 2-1 up and pretty much settle the tie.

Burnley FC 2-0 Liverpool – 20 August 2016
[ English Premier League ]
02′ 1 – 0 Sam Vokes scored in just 2nd minute of the game to put Burnely 1-0 up against Liverpool in windy conditions at turf moore.
37′ 2 – 0 Andre Gray made it 2-0 before the break after quick counter attacking move was finished off by Gray with a neat left footed finish. His first premier league goal.

Burnley on the other hand is expected to keep the 4-4-2 system with Vokes and Gray playing upfront while Boyd, Jones, Marney and Arfield to start in midfield. This is how I expect both teams to lineup on Saturday afternoon

Match Predictions: Klopp has installed his high and relentless pressing mentality to this Liverpool squad and they had a superb pre-season getting them in absolute tip top shape for the start of the season. I expect them to put Burnley under massive pressure early on and might score a couple of goals to settle the match. I am going with a 2-0 win for Liverpool in this one.