Liverpool took on Exeter City in the FA Cup third round replay at anfield this wednesday night, 20th January 2016. Joe Allen gave Liverpool 1-0 lead in first half as Liverpool dominated the game in first half even with the starting lineup full of academy players. Liverpool added two more goals (Sheyi Ojo and Joao Carlos) in second half to ensure their passage to fourth round of the fa cup. You can watch match highlights of the game below.

Liverpool beat Exeter City 3-0 in the replay of their third round tie in FA Cup. Joe Allen scored the opening goal in first half while youngsters Sheyi Ojo and Joao Carlos scored goal a piece in second half in a comfortable 3-0 win for Liveprool.

Only Jose Enrique, Christian Benteke, Joe Allen and keep Simon Mignolet were from the first team squad while rest seven players were from Liverpool Acedamy who started the game. But Klopp side manage to get a positive result to get through to the next stage of FA Cup.

Liverpool vs Exeter City Live Stream & Highlights: We will have free live streams of Liverpool vs Exeter City game right here on this page. links will be available 1 hour before the kickoff with BBC One coverage plus couple of alternative links. After the game live stream will be removed and match highlights will be placed here. So if you missed the live action do tune in here to catch the replay highlights.

Exeter City took the lead inside 10 minutes when Jamie Reid’s cross found Tom Nicholls who poked home with a neat touch to score Exter City’s first of the night and his 10th goal of he season. Liverpool struck minutes later to make it 1-1. Brad Smith’s effort was cleared off the line but it fell nicely for Jerome Sinclair who made it 1-1 on the night. Adam Bogdan failed to clear his lines as Lee Holmes neatly taken set piece found its way into the back of the net. 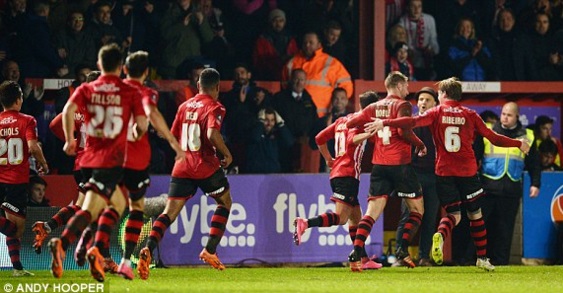 Jurgen Klopp handed starts to plenty of Liverpool youngsters against Exeter City in FA Cup third round, in what was a incredible game of FA cup, Exeter City took the lead inside 10 minutes through Tom Nicholls. Liverpool hit back with a goal from Jerome Sinclair but Liverpool keeper made another blunder to let Exeter go into the break with 2-1 lead. Liverpool equalised through Brad Smith in 73rd minute.

Liverpool vs Exeter City Preview: League two side Exeter City can pose a real threat for Liverpool’s chances en route to wembley in FA Cup. Jurgen Klopp will be getting the real taste of english football with Liverpool’s third game inside a week and to top that off he is struggling to assemble a starting lineup for FA Cup clash with as many as 12 players missing through injuries. Although Exeter City has the history against them as they have lost all 5 of the games played between the sides.

Looking at the form of both teams its hard to see Exeter City getting anything from this match all they will be hoping is a draw to get a replay at Anfield which will be disaster for Liverpool considering their other commitments in UEFA Europa League and Capital One Cup.

Team News & Lineups: Liverpool will be without any of the first team central defender as Skrtel, Lovren, Sakho and Toure all missing out through injuries which means Emre Can might start in central defense alongside Lucas who shifted in against Stoke in midweek. Philipe Coutinho will also join Danial Sturridge on the injury list but a rare positive is of course the return of James Milner who will fill in as captain with Henderson also ruled out.

Even with a second or third string side Liverpool should have enough in their locker to get the better of 16th place team in fourth tier of english football. Exeter City has only won 2 matches in their last 10 games while Liverpool will be buzzing with their back to back wins in the league and Capital One Cup. I am going with a comfortable win for Liverpool in this one.