Liverpool are set to host Manchester City in the UEFA Champions League quarterfinal 1st leg match on Wednesday night, 04 April 2018. Its a huge match for both sides what should be evenly matched contest over the two legs. The first leg takes place at Anfield on Wednesday night followed by Tuesday night fixture on 10th April 2018. BT Sports has live coverage of the game in the UK while Fox will have live coverage for US viewers and beIN Sports in the middle-east.

Liverpool 4-3 Manchester City Highlights
[ Premier League 2017-18 Match ]
09′ 1 – 0 Alex Oxlade-Chamberlain scores with a low hard shot at the far post to put Liverpool 1-0 in league.
40′ 1 – 1 Leroy Sane made it 1-1 on the evening with a nicely taken near post finish, however Karius should have done better.
59′ 2 – 1 Roberto Firmino scores with incredible chip finish to put Liverpool back in lead.
61′ 3 – 1 Sadio Mane scored with a fierce left footed strike into the near post.
68′ 4 – 1 Mohamed Salah took advantage of Ederson’s poor clearence and him being so far away from goal as Salah slotted home in empty net.

Match Preview & Team News: Pep Guardiola’s City were installed as out and out favourites going into the 2017-18 season and they have not disappointed so far having been unbeaten, going on a 16 game winning streak, beating all the other top 6 teams in what has been a absolute superb first half of the season. They already look the best team in England and Guardiola is about to add Alexis Sanchez to Manchester City making them even more difficult to beat.

Both sides are pretty good upfront and both of these teams have fixed their issues in defense and now looks much more balanced as we head to the bussiness end of the season. Liverpool added Van Dijk who will start alongside Matip in defense but Liverpool do have to improvise now as they will be without Coutinho. Last season Liverpool completed the double over City winning both matches 1-0 and we can expect another tight game between these two quality attacking sides. 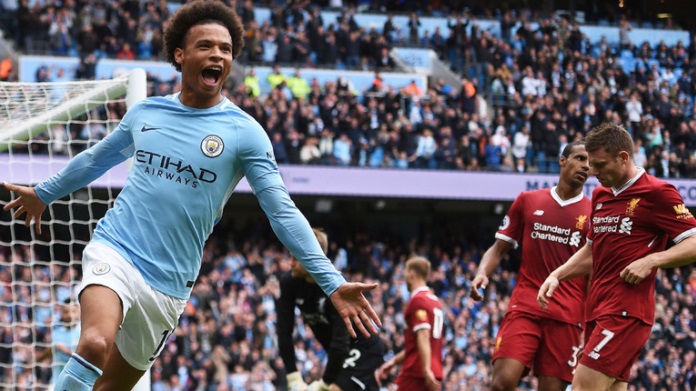 Last time these two meet was back in September 2017 when Manchester City ran riot against 10 men Liverpool winning 5-0 at Etihad Stadium. That result kick started City’s incredible 16 game winning streak and Liverpool will be hoping to be the first team in the league to beat City this season.

Manchester City 5-0 Liverpool – September 2017
[ Premier League 2017-18 Match ]
25′ 1 – 0 Sergio Aguero rounded off the keeper to finish a brilliant move as City go ahead 1-0 against Liverpool at Etihad Stadium.
37′ [ Red Card ] Sadio Mane got a controversial red card after he collided with City keeper Ederson and referee sent him off for boot on Ederson’s head.
45′ 2 – 0 Gabriel Jesus made it 2-0 just before the break to complete City’s first half dominance.

Liverpool on the other hand played with full strength team against Augsburg and a Daniel Sturridge continue to play 60 odd minutes after recovering from series of injuries which kept him out for best part of last 1 year. He is likely to start upfront with Coutinho and Firmino playing on either flanks. Jordan Henderson, Emre Can and James Milner should start in midfield.

Recent Form & Predictions: If City were to win their game this weekend they will go 18 points clear at top for atleast a day as United play on Monday. However a defeat for City and with United, Chelsea and Liverpool winning will make the equation alot more interesting at the top of the table. I am going with a home win for Liverpool in this one and just for a sake of some sort of title race lets hope it happens.