Manchester United are set to host Liverpool in the premier league game on Saturday, 10th March 2018 at Old Trafford in what will be huge game for both sides. Only two points and a league position separate the two going into the big game, United are second with 62 points while Liverpool are third with 60 points. A win for either side will put them in a good position to finish behind City in the league. However there is more than just second place at stake, this game is widely regarded as one of the biggest in England between two of the most successful team in the country.

Untied v Liverpool will be an early kickoff on Saturday, 10th March 2018 starting at around 12:30 uk time with SkySports broadcasting the match in the UK while US viewers can watch the game on NBCSN live in th early hours of saturday morning. The last four meetings between the two sides have been draws and its hard to see any other result going into the game. Liverpool are in great form at the moment who will fancy their chances against a United side who are getting results without playing confidently.

Team News & Lineups: Manchester United are likely to start with McTominy, Matic and Pogba in the central midfield and try nullifying Liveprool’s midfield and high press. Lukaku, Sanchez and Martial set to make the forward line with Valencia, Bailly, Smalling and Young playing in defense. Liverpool is set to continue their their trusted system with Firmino uptop with Salah and Mane playing in attacking roles on either side. Oxlaid-Chamberlain, Henderson and Can to start in central midfield roles.

This is how I expect both teams to lineup on Saturday afternoon. We might see Jose playing Lingard in place of McTominy to make it more of 4-2-3-1 which is more suited to counter attacks. 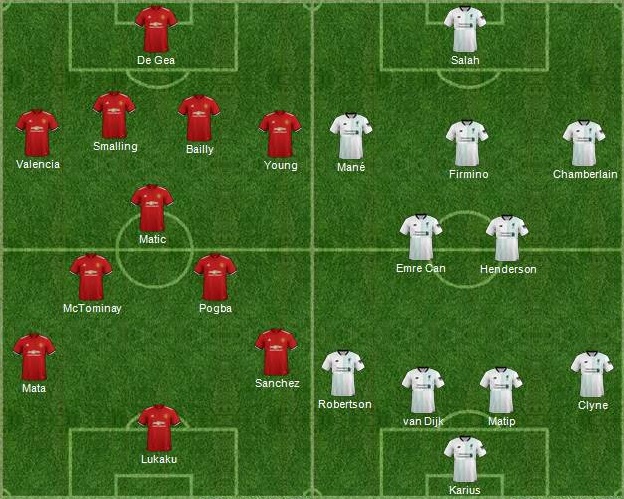 Match Predictions: Only Manchester City has beaten Manchester United at Old Trafford over the last couple of seasons. However this Liverpool side are a sight going forward and United defense need to be at top of their game to stop the likes of Firmino, Salah and Mane. Klopp do have a good record against Mourinho sides and I expect Liverpool to break down United and get what might be a crucial win in their persuit for second place finish in the League.