A absolute cracking football match at Carrow Road saw Liveprool getting a late win against Norwich with a 5-4 scoreline in a game which will go down as one of the classic premier league games in recent history. You are not going to see a more exciting match this season

Roberto Firmino gave Liverpool the lead in 19th minute to ease the nervous Liverpool should in opening exchanges. But Norwich hit back with a goal at the stroke of half hour mark when Dieumerci Mbokani made it 1-1 on the day. Norwich took the lead and doubled it with Steven Naismith and Hoolahan scoring either side of the break before Henderson and Firmino scored to make it it 3-3.

Absolute cracking game at Carrow Road saw Norwich City taking a 3-1 lead only for Henderson and Firmino to bring Liverpool back into the game at 3-3. Three goals from Norwich looked to have won the game but a late resurgence brought liverpool back into the match but the both teams took the lead before Liverpool finally settled the tie in dying moments with a goal from James Lallana

Preview & Team News: Jurgen Klopp fielded a team full of academy players in the second leg of their FA Cup tie against Exeter City which they managed to win 3-0 during the midweek. So all the first team players are well rested and should be in good condition come this saturday in a game where alot is riding on for Liverpool and if they drop points against Norwich they might find themselves 11 to 12 points behind the fourth place team by the end of the weekend.

Jurgen Klopp is learning english game the hard way having only recorded 5 wins in the 14 league games incharge of Liverpool Although their has been signs of progress but its more like “one foot forward and two back” kind of season for Liverpool as they won against City and Chelsea away but some how managed to lose matches at home against the teams they should be winning.

Daniel Sturridge is reportedly back in the training but won’t be part of the squad for Norwich game while Coutinho is ruled out already. Klopp is likely to keep Firmino, Lallana and Possibly Jordan Ibe as a three man attack against Norwich with Christian Benteke on the bench. Lucas, Henderson and Can should return in the starting lineup while Clyne, Lovren, Sakho and Moreno set to continue in defense. This is how I expect both teams to lineup. 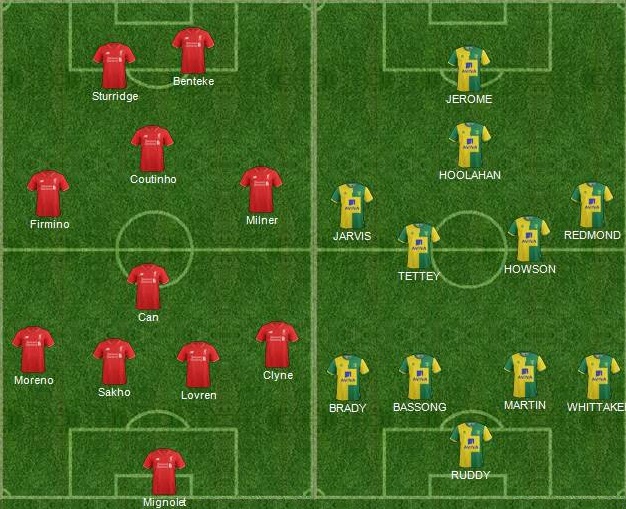 Match Predictions: Hard to predict what Liverpool will turn up, they can demolish City and Chelsea but lose to West Ham leaving Liverpool fans scratching their heads. Norwich City on the other hand are just 2 places and 2 points above the drop zone and they will be eager to get something out of this match. I am going with a 2-1 win for Liverpool in this one.