Liverpool started the 2015-16 season against Stoke City the team which the lost against at the end of last season with a massive 6-1 margin, Brandon Rodgers started with Benetke, Milnar and Clyne in the starting lineup while Roberto Firmino came on as a sub in what was a entertaining 1-0 win for Liverpool with a stunner of a goal coming from Philipe Coutinho in 87th minute.

Liverpool vs Stoke City Short Preview: Since the May 2015 6-1 defeat in the hands of Stoke City alot has changed with Liverpool as captain Steven Gerrard and Raheem Sterling leaving the club while Christian Benteke, Roberto Firmino and James Milner joined Liverpool which will surely make them a better unit.

Stoke City also strengthen their squad with arrivals of Joselu and Ibrahim Affelay in attacking positions while former red Glenn Johnson will start for Stoke against Liverpool. Although Mark Huges, Stoke manager has some selection worries in defense with captian Ryan Shawcross missing due to injured back.

Possible Starting Lineups of Liverpool vs Stoke City:
This is how I expect both teams to lineup in the sundays big clash, Liverpool are likely to start with new record signing Benteke upfront with brazilian duo Coutinho and Firmino started just behind. 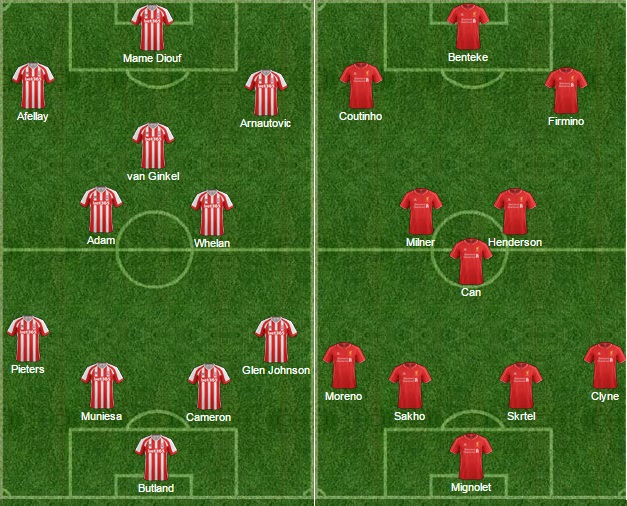