Liverpool has qualified for the final of 2016 Europa League after beating Villarreal 3-0 in what another magical night at Anfield. Liverpool will play Sevilla in the final in Basel on 18th May 2016.

Liverpool needed another great night at Anfield to qualify for the Europa League final as they hosted Villarreal in the second leg of their semifinal tie having lost the first leg at El Madrigal by 1-0 thanks to last minute goal. At anfield however, Liverpool fans turned up the head and after a moving tribute to “hillsbrough victims” Liverpool started the game brightly and took the lead as early as 6th minute to go level on aggregate. Sturridge scored in 63rd minute to put Liverpool in lead while Victor Ruiz sending off put Liverpool in commanding position with 20 minutes left to play.

Liverpool started in absolute superb and dominated the game from word go. They took the lead in 6th minute when after constant pressure in the box they scored when Firmino put in a low cross inside the box and Sturridge fail to poke home from close range but the ball took deflection off Bruno and went in the back of the net.

Liverpool went into the break leading 1-0 and they started the second half where they left off first. Daniel Sturridge scored in 63rd minute with a neat finish. His first in Europe from open play in best part of last 2 years. Victor Ruiz was sent off making Liverpool’s life easier in the last 20 minutes.

Liverpool fans paid a moving tribute to Hillsbrough victims before the kickoff and that really helped create a superb atmosphere at the stadium.

Liverpool 3-0 Villarreal Highlights
[Europa League 2016 Semifinal 2nd Leg ]
07′ 1 – 0 Bruno Soriano bundled home in his own net in 6th minute after Sturridge fail to connect the Firmino’s cross.
63′ 2 – 0 Daniel Sturridge scored with a neat finish to put Liverpool 2-1 ahead on aggregate.
70′ [ 2 Yellow/Red Card ] Victor Ruiz was sent off for his second bookable offense.
81′ 3 – 0 Adam Lallana poked home from close range to pretty much end the contest and put Liverpool in the final of 2016 Europa League.

Match Preview: Liverpool are no just three good performances away from ending the season on a high and not only has the chance to win some sliverware but make their way into the Champions League places by winning the Europa League. It will be a massive task however as Villarreal are one of the most consistent team in Spain outside top 3. Villarreal who are already well placed to qualify for Champions League next season will be looking to take positive result back to anfield.

Adrian Lopez late injury time winner was the difference between the two sides as Villarreal take a narrow 1-0 win to Anfield while Liverpool has to produce another massive night at anfield in the 2nd leg next Thursday.
Jurgen Klopp side kept Villarreal in check for most part of the game in the first leg of Europa League semifinal this Thursday night, 28th April. Both teams set themselves up for counter attacking football which resulted in a boring 0-0 first half. However a late injury time goal by Adrian Lopez made it 1-0 for home side with pretty much the final move of the game.

yellow submarine as they are known in Spain, Villarreal has a solid squad with some very technically gifted players like Denis Suarez who will be they key in attacking role while Cedric Bakambu (22 goals in all competitions) is one played Liverpool need to mark out of the game if they were to qualify. Villarreal’s real strength is their water tight defense with Victor Ruiz at the heart of the action and over the course of La Liga season they have only conceded 31 goals so far only Barcelona and Atletico has conceded less.

Having said that Spanish side do tend to bottle it when it really matters. They have reached the Champions League semifinal once before when Arsenal defeated them on aggregate while Another semifinal in Europa League followed back in 2010/11 season where they lost against FC Porto. Liverpool on the other hand rarely miss out once they reach later stages.

Team News & Lineups: Jurgen Klopp is likely to keep the winning formula with Sturridge playing upfron alogside trio of attacking roles in Firmino, Coutinho and Adam Lallana while James Milner and Lucas set to start in central midfield. This is how I expect both teams to lineup on Thursday night. 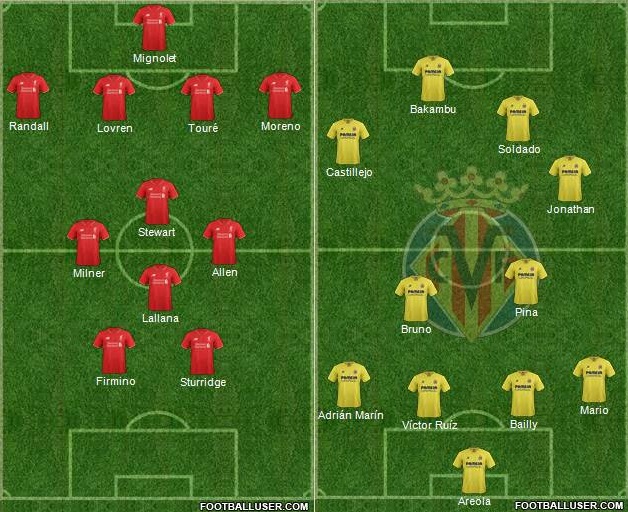 Match Predictions: Liverpool need to produce another superb performances over two legs to breakdown Villarreal who are one of the most technically strong sides in spain. A decent result away from home will set up Liverpool’s home game at Anfield nicely and thats what I expect to happen with a score draw at El Madrigal and a norrow win at Anfield will get them through to yet another European final.

After producing a magical night at Anfield Liverpool took on Villarreal in the 2016 Europa League semifinal first leg at El Madrigal and it turned out to be a snooze fest as both teams pretty much cancel each other out for best part of first hour. Villarreal had more possession and had couple of half chances. The game kept similar pattern in second half as both teams looked to be happy with a 0-0 draw but a late goal in injury time by Adrian Lopez ended what could have been a good result for Liverpool.